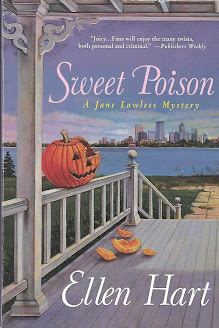 Jane Lawless is being run ragged trying to help her father win the governor's race while keeping her restaurant business going full-steam. Not to mention trying to juggle a long-distance romance in the bargain. Roy Lawless's campaign is chugging along nicely until his rival uses the internet to post a list of criminals who got light sentences thanks to Ray's stint as a defense lawyer. At the top of the list is Corey Hodges. He cut a plea deal on a rape he swears he didn't commit because Ray thought the circumstantial evidence too much to overcome. People don't like to see convicted rapists back on the streets.

Corey has just been released from prison and decides it would be a cool idea to volunteer for Ray's campaign. Just to see what's what. Corey may or may not have been guilty of the rape--but one thing's for sure...he's got anger issues and he'd love to find a way to make Ray Lawless pay for the advice that got Corey put in the slammer. Then one of Ray's volunteers is murdered and all the signs point to Corey again. Same MO...except this time the girl died. Corey's aunt is sure (well...really wants to believe) that her nephew is innocent and she asks Jane to investigate. Jane is already interested...she wants the killer found in time to save her father's campaign. But life is complicated and finding the culprit isn't going to be easy.

The cover makes you think you're getting a nice, cozy little mystery. And, after all, it features a restaurant owner who plays at detective--so it shouldn't be too gritty. But that isn't what you get at all. It's a pretty grim plot line with way too many intense, broken or dysfunctional relationships in it to suit me. You've got Jane, our heroine, and her stalker ex-girlfriend. You've also got Jane and her rocky, long-distance relationship that goes sour fast (twice--as if once in the book wasn't enough). Then there's the victim and her stalker ex-boyfriend--who may or may not have killed her out of revenge. And there's Corey who is stalking his ex-girlfriend while making time with the victim. So, of course, he's also on the suspect list, especially since the MO is the same as the case he was put away for. And all the references to Jane's brother's marriage that was maybe on the rocks before but is maybe okay now? (I wasn't clear on that one.)

I just couldn't really get into this one. It's not my cup of tea at all. Fairly interesting motive for the murder is the only thing that takes this out of the one star range. ★★

Last Line: And then, giving everyone one last encouraging smile, he left the room to the sound of cheers and applause.

Death's = one (shot with taser and died)