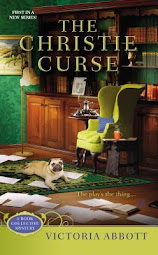 Jordan Bingham is in need of a job--she owes money on grad school loans and on a credit card that a good-for-nothing ex-boyfriend maxed out before she knew what was happening. She'd like a job that fits with her interests, but who wants a literary woman with a specialty in languages? Vera Van Alst--the most hated woman in Harrison Falls...that's who.

Vera is a rabid book/manuscript collector and she has advertised for an assistant to help her track down a rumored long-lost play by Agatha Christie. A play that's never been produced or published and supposedly written while Dame Agatha went missing for eleven days in 1926. Vera had an assistant, but he, most annoyingly, got run over by a subway before he could track the manuscript down. Jordan is desperate for a job and decides that she'll try and run the gauntlet of Vera's irritable ways. Because, other than her employer's personality, everything seems perfect--getting paid to do research? Awesome. Hobnobbing with rare books people? Cool. Living in a fantastic little attic apartment? Sweet. Finding out your predecessor was probably murdered? Now wait a minute....Before she knows it, Jordan isn't just looking for the missing Christie. She's also trying to figure out who killed Alexander Fine before whoever they are decides Jordan Bingham needs bumping off as well.

The Christie Curse is definitely a cozy mystery. The only death takes place off-stage (well before we come along) and the attempted second is very light on violence. We also have the amateur sleuth getting herself into trouble with both the bad guys and the police while she tries to make sense of the clues left for her. The plot is a little murky at times (I'm wondering just how X got involved in the first place, for one), but this type of mystery isn't meant to be intricate and in need of high-voltage brain power. It's just a lot of fun to read.

Jordan is a very likable protagonist--I immediately had a fondness for her from my work with graduate students in real life. And I loved the way she handled her difficult employer. Their interactions made for for some highly enjoyable moments, as did her life with her disreputable uncles. Overall, a fun, light mystery with an interesting tie-in for Christie fans. The next one has connections to Dorothy L. Sayers and I'll be interested to see how that plays out. ★★★ and a half.

Deaths = one hit by subway

Thank you so much for this lovely review. It made my day and I have told the world. I am half of Victoria Abbott with my daughter Victoria Maffini and also write mysteries as me, myself and I, Mary Jane Maffini. I sent you an FB request. I see we are both friends with Jim Napier. Thanks again! MJ

Mary Jane: You are very welcome! I enjoyed this a lot and plan to read the next one as soon as I can shoe-horn it into my very (VERY) full TBR list.

Thanks again! Where would we be without readers and reviewers? Hugs.