The Ampersand Papers (1978) by Michael Innes 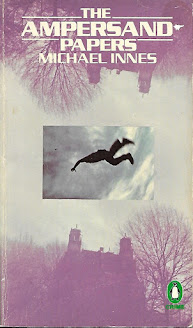 Sir John Appleby, retired from Scotland Yard, is on his way to visit friends. He discovers that he's going to be very early and decides to make a break in his journey by taking a walk along a convenient bit of beach. It's nice and deserted and it'll be a restful, solitary walk. That is, it will be until Dr. Ambrose Sutch drops in on him--quite literally--from above. Dr. Sutch has been commissioned by the Lord Skillet of Treskinnick Castle to sort through the family papers in a quest to find evidence that Adrian Digitt (one of the family ancestors) hobnobbed with the likes of Shelley and Byron and other literary lights. Because, after all, collectors are paying tidy sums for unknown scribblings and letters from such people--and the Digitts are a bit hard up. They've been selling what they can to help keep the ancestral pile going. There's also rumors of hidden treasure from a Spanish galleon sunk off the coast and just maybe there are references to that somewhere.
But...back to Dr. Sutch. So, the hoards of papers have been stashed in the tippy-top of the North Tower of the castle, which is only reached by ascending a very rickety staircase erected by a previous Digitt. That rickety staircase has elected to collapse and, thus, Dr. Sutch has plunged to his death right before Sir John's eyes. There are indications that staircase didn't just fall down all by itself and since one the Yard's most famous ex-investigators happened to be on the spot the Chief Constable asks Sir John if he will help out unofficially. The investigation leads to hidden caverns under the castle, a secret hiding place in the castle, the finding and losing of Adrian Digitt's papers, and a surprising wrap up of the mystery of the falling staircase.
I originally read The Ampersand Papers in 2011 before I devised my Mount TBR reading challenge. At that time I rated it as a solid outing, though not one of Innes's best. I'm still of that mind. I think it takes too long to get Sir John involved and I much prefer the stories where he's brought on stage early in the book. The Digitts are amusing (if sometimes annoying) characters and I particularly like Lady Ampersand who may not be clever in a standard way, but certainly knows more about what's going on in the castle than her husband. ★★★
Quotes
First Line: Who knows what may be buried in his back garden?
The Diggits, however, produced (like the Coleridges, and numerous other respectable families) an occasional black sheep. Some had even dabbled in poetry-- (p. 9)
...from time to time other Digitts, although not themselves creative, had been inclined to take up with literary, and even positively artistic people. Nobody much minded; the morals of these eccentrics had no doubt been impaired by keeping such company; but it wasn't like gaming in a big way, or wrecklessly (sic) debauching young women in good society... (p. 9)
Last Line: "So much," Appleby said, soberly, "for the remains of Adrian Digitt."
*****************
Deaths = one fall from height
Posted by Bev Hankins at 9:14 PM