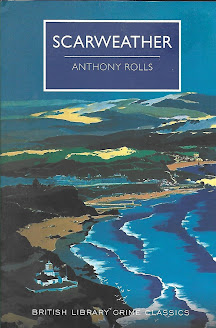 I'm afraid I've been a bit spoilerish in this review. Read on at your own risk...really spoilery bit is made invisible unless you highlight it.

In 1913, our narrator John Farrington along with his cousin Eric Foster is invited to visit Scarweather, the home of the famous archaeologist Tolgen Reisby. Reisby has many interesting finds to show the two young men and Foster, who has a budding interest in archaeology, is struck with a bit of hero-worship. But he's struck even harder by love's arrow when he meets Reisby's much younger wife.The two behave with every propriety, but Farrington can't help but worry that his cousin will get himself into trouble. Many visits follow, some of which include Farrington's friend Frederick Ellingham, who takes an interest in a ancient burial site known locally as the Devil's Hump. He'd like to see Reisby open an archaeological dig there. Everyone is friendly and everything seems to be going smoothly.

Then Foster makes a visit to Scarweather on his own--in answer to an invitation made by Reisby while his wife is away. The next thing Farrington knows, he's on the receiving end of a telegram telling him that his cousin is missing at sea, presumed drowned. He asks Ellingham, who has an investigative nature, to accompany him and the two are greeted with an odd story. Foster apparently expressed himself forcefully on the subject of taking a swim off the coast almost immediately upon arrival (he'd often done so)--but the evening was chilly and Reisby thought he had convinced the young man to wait till the next day. Foster room and bed gave evidence that he had not gone to sleep, but apparently stayed up all night and headed out in Reisby's boat at about three or four in the morning. The boat was found aground with Foster's clothes aboard and no sign of the young man. A search was undertaken by boat owners in the area, but Foster was eventually given up as having drowned. Farrington is a bit disappointed that Ellingham doesn't seem as interested as he supposed his friend would be. In fact, Ellingham spends a great deal of time taking pictures of the Devil's Hump.

Fifteen years later, after a world war and Farrington's law profession has intruded, he and Ellingham return to the Scarweather area. Ellingham has told him that he still thinks about the missing Foster and he's quite sure that Reisby has never told everything he knows about that night. They soon learn that two more men have disappeared and a man who had sent Foster a letter before he disappeared has committed suicide. Are these things related? And now that Reisby is finally going to dig at the Devil's Hump Ellingham makes an interesting prediction about what might be found there.

I'm a bit on the fence with this one. It's a perfectly fine mystery novel with a fairly standard motive for the initial murder. I enjoyed reading it for the most part. The description of Scarweather and the background of archaeology was interesting. I quite liked the character of Ellingham and wouldn't mind seeing more of him. But...our narrator is one of the most dense Watson characters I've met since Nigel Bruce made Sherlock's Watson such a bumbling fool.

Does the reader now perceive the shadow of these events? If so, I congratulate him upon possessing a swift and practical imagination. [p. 163]

The motive for the murder is glaringly obvious. The identity of the murderer is glaringly obvious. Exactly what happened to Eric Foster is glaringly obvious. [spoiler in apparent blank space: And in case you didn't get it just from things Ellingham says and asks, then the fact that the certain area of the Devil's Hump has been recently disturbed and that this fact is repeated several--no, MANY times--ought to be a HUGE clue.] And Farrington gives us these HIBK-like phrases throughout the book: "Little did I know what Ellingham meant by..."; "I had no idea that such and such indicated..."; "Had I realized why Ellingham asked those questions". For the love of all that's holy, man, did you use up all your brains on reading law?

The other thing that bothers me is the dangling bits at the end. The motive for the murder is all nice and tidy. We definitely know who did it. But as far as the other deaths and presumed deaths go...not really explained properly. Why did Rolls drag in the man who wrote a letter to Foster and then ultimately committed suicide? It didn't have anything to do with the real case and if Rolls was trying to provide a red herring, then it wasn't very effective. If you want to splash false clues around, that's all well and good--but don't make the solution to the mystery so neon-sign-blinking-obvious that nobody will pay the least bit of attention to them (other than being annoyed that they were brought in and not properly explained). And...it would be nice to know if the other two missing, presumed dead men really are dead or not and if they are if our villain did them in. Are they dead? We don't know. If they are, we could come up with a reason why the villain got rid of them, but it'd be preferable that Rolls square that all away in the wrap-up.

So--good marks for setting and characterization and some deductions on the wrap-up. Decent mystery. ★★★

First Line: My friend Ellingham has persuaded me to reveal to the public the astounding features of the Reisby case.

Nothing is more likely to win the affection of a learned man than the agreement upon a solemn trifle. (p. 12)

Youth is not the time for reflection, it is the time for heedless enjoyment. I determined, before the evening was over, that I would not bother myself with conjectures about inscrutable personalities, but would have a jolly good holiday. (p. 46)

Goy, sir is one of those amiable though obstructive blockheads who believe in the sanctity of the written label....The moment he sticks his finicky label upon a thing, the nature of that thing is determined for all eternity. (Profess Reisby, p. 58)

An independent youth [Tuffle], he did not belong to the Reisby faction or the Goy faction but held himself superior to both. By these perpetual and emphatic disagreements he obtained a reputation for true knowledge and originality. (p. 168)

Eccentricity of behaviour is to be looked for when the intellect is lively and original, and above all when it is explosive and creative. Eccentricity, indeed, is invariably present in men of real distinction, and invariably absent in the mere money-grubber. (Frederick Ellingham, p. 222)

Last Line: My stepdaughter Frances is engaged to Peter Ellingham, who is launched already upon what has every appearance of being a distinguished career as a biologist.

Deaths = 3 (one hit over head; one poisoned; one shot) There are two more presumed dead--but we're never given a method and the bodies are never found.

Hmm not for me, but thanks for sharing your thoughts

Yes I had similar issues with this book as well. It was nice to be entertainingly reminded of them in your review lol