A Client Is Cancelled 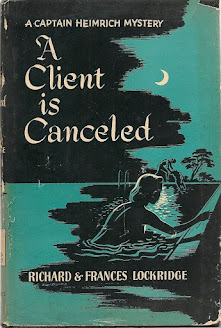 A Client Is Cancelled (1951) by Frances & Richard Lockridge

Oh-Oh (Orson Otis) and his wife, the Pooh (Winifred who doesn't like to be called Winnie), are invited to a cocktail party at their neighbor's one hot summer afternoon. Oh-Oh can't really see why they should have to put on more clothes (suitable for visiting) to be even hotter on the Townsends' terrace than they already are on their own back porch. Besides, Pooh's Uncle Paul (also known as Uncle Tarzan) may be liable to challenge Oh-Oh to a tennis match or something much too exhausting in the heat. But Pooh says, "One can never tell; a chance is always worth taking." Why, if they hadn't gone, they would have missed out on one of the biggest murders in their area of the New York countryside. And...they would have missed out on being suspects. (But I get ahead of myself.)

So, the Otises duly dress and make their way to the Townsend place up on the hill. The Townsends are much better off than the Otises--lots of land, everything all shiny and fashionable, and a lovely swimming pool (that will be important later). Pooh's uncle is there but he seems far too distracted by business matters to think about athletic endeavors. Something is brewing in tobacco advertising arena. George Townsend has the advertising campaign for Paul Barlow's tobacco company and there seems to be a stale odor surrounding it. In fact, Oh-Oh senses a great deal of animosity swirling around Uncle Tarzan. Nothing he can describe definitely when he's asked later, but something, all the same.

After the cocktail party breaks up, the Otises wander off to the local inn for more (!) drinks and some dinner, run into Dwight Craig and Ann Dean whom they met at the party, decide to go home but then run into some other people they know and wind up even more hot and tired than before. They decide it would be fine idea to take George Townsend up on his offer to "use the pool any time" and have a midnight swim. Which all goes..swimmingly... until the Pooh takes one final, deep dive and sees something on the bottom of the pool that doesn't belong there. Uncle Tarzan--quite dead, but not drowned. He's been shot. They quickly dress and raise the alarm up at the Townsend house (where half the household seems to still be up). Captain Heimrich and Sergeant Forniss arrive and we're off and running in another State Trooper murder case.

The Otises come under suspicion, especially after it is discovered that Uncle Tarzan very generously left his niece fifty thousand dollars in his will and Oh-Oh's service revolver has managed to go missing. Knowing the Lockridge's light touch, we feel fairly certain that Oh-Oh (our narrator) isn't guilty and there are plenty of other motives hanging around. There's the farmer with a grudge against Barlow--for supposedly running his family out of the tobacco business. There's Townsend and Craig who may have been facing the loss of their biggest advertising campaign. There's Barlow's daughter who may have resented her father's meddling in her romantic affairs. But then Oh-Oh and Pooh are found standing over another dead body.

So...this isn't the all-time greatest Lockridge plot. Honestly, I thought it pretty obvious and Heimrich's methods of detection weren't quite as appealing to me in this one. He keeps pushing pieces around trying to get the players to reveal themselves and then spends a really long time building up suspense in the final scene. But despite all that, I do really like Oh-Oh and Pooh--the characters themselves. I'm not enamored of their nicknames, but I wouldn't mind them quite so much if they weren't used all the time. I do enjoy watching them interact with each other and with other characters. They remind me of younger versions of Mr. & Mrs. North. ★★★ and a half for a decent, light mystery.

Spoiler (in the apparent blank space--just highlight if curious): So...the title is an absolute give-away if you pay attention to it. There's only two people for whom Paul Barlow is a client--and readers of Lockridge books know when there is a couple of young people going through the pangs of romance that neither of the couple will wind up being guilty. So that leaves you with one person.

First Line: It was one of the more interesting murders of that summer and the Pooh and I almost did not attend.

Last Line: So we went, of course. The Otises try not to miss out on things.

Pulp fiction sells--witness the check that very morning--but one has to pulp a lot of it. (p. 9)

Apparently he [Dwight] had the same problem about going ahead with a lot of things he would have enjoyed saying, and was overtaken by manners. This seemed a pity, since they were both mad enough to be quite interesting. (p. 18)

He [Uncle Paul] told the Pooh, with an inflection of surprise, that she was looking very well. He had, evidently, expected her to look like a starving refugee. [p. 23]

I finished my drink and began to wonder how many I'd had. I couldn't remember, exactly, so I poured myself another. [p. 31]

We agreed that one nice thing about my occupation was that it could be carried on anywhere, which was what people were always telling us. this isn't particularly true, but it's truer when you have fifty thousand dollars than when you don't. Most things are. [p. 68]

...we agreed that neither of us had killed Uncle Tarzan for fifty thousand dollars. We hoped Captain Heimrich would agree too, since that would make things a good deal more chummy. [p. 69]

One o'clock in the morning is, certainly, one hell of a time to take a walk in the country, moonlight or no moonlight. I'd once known a man who did, but he was a man peculiarly prone to cosmic thoughts, which he found it necessary to walk off. I doubted Francis Eldredge had cosmic thoughts very frequently. [p. 92]

I said his {Heimrich's apparent} method, seemed like being a somewhat wasteful one....Obviously, if one could stir up a murderer until he had murdered all the people whose activities might involve him, one would end up with a solution. There would be one person left alive, and he would be "it." It was a method that leaned hard on the theory of expendability. [p. 125]

You might have enjoyed this one more than I did. Oh-oh and Pooh did rather get on my wick lol