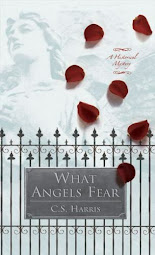 King George III's reign is drawing to a close and it's the dawn of the Regency era.  Whigs and Tories are battling behind the scenes for influence over the Prince Regent (George Augustus Frederick). A beautiful young actress found murdered on the altar steps of a church--her throat savagely cut and her person violated. When a dueling pistol belonging to Sebastian St. Cyr, Viscount Devlin, is found and a witness's testimony place him at the scene, the police are quick to believe they have their killer. After all, he wouldn't be the first young nobeleman to have gone off the rails, broken by experiences as a soldier in the Napoleonic Wars.

Except...Devlin didn't do it. And he's determined to prove it. He escapes the long arm of the law and begins his own investigations--at first simply to clear his name, but the more he learns the more he is determined to seek justice for the woman. He gathers a band of allies--from the ex-military doctor who conducts an unauthorized autopsy (discovering that the woman was raped after the murder) to a young street urchin to Kat Boleyn, a lovely actress who once broke Devlin's heart. Another woman is killed and the nets of the law are drawing closer to our hero...time is running out. He is startled to find that his investigations are leading closer to home than he imagined and it all ties in with an underground of espionage. When one more woman's life is at stake, will he be in time to save her?

According to my records, I read this once upon a time before I started blogging. The fact that I remembered very little of it points to the reason I started this blog in the first place--so I could write reviews of the books I read and hopefully give my sieve-like memory a boost. One of my favorite sub-genres of mystery is the historical mystery. I have a strong preference for the Victorian era, but the Regency period is also a favorite. I recently picked up several of the later books in the series (from a library bookstore clearance sale) and wanted to go back to the beginning and read in order.

Harris does a fine job setting her Regency-era scene and I definitely felt like I was being drawn back in time to the period. Her characters are fairly stock-in-trade (from the silent, near-loner hero who publicly seems a bit hard-as-nails, but underneath is sympathetic to those in need to the injured, ex-military doctor to the mysterious, forbidden love interest to the villains who want nothing more than to see our hero fail), but she makes them her own and manages to make the reader interested in and really care about them. She ties up the threads of the primary mystery very neatly, but there are plenty of loose threads from the rest of the pattern to follow up in future books. I look forward to reading about them. ★★★★