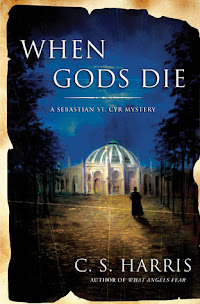 When Gods Die is the second in the Sebastian St. Cyr (Lord Devlin) mystery series. At the end of the debut novel, Sir Henry Lovejoy, impressed at Devlin's abilities in ferreting out the murderer, asks if he'd like to take on investigative work among the upper classes whenever future delicate cases might arise. Sebastian turns him down flat, but then immediately finds himself embroiled in another delicate mystery in this latest outing.

The Prince Regent is holding a party at the Royal Pavilion in Brighton. All goes well until the Prince enters his Yellow Cabinet, anticipating a romantic conquest, only to find the young Marchioness of Anglessey dead with a knife in her back. Rumors already swirl around his family--rumors that the madness of his father, George III, runs amok in all of the Hanovers. And now the rumors will fly that he is as violent as his brother Cumberland, who killed his valet (though officially that was ruled a suicide). When a beautiful necklace that was last seen around the neck of Sebastian's mother on the day she perished in a boating acciedent is found around the dead woman's neck, the Prince's confidante Lord Jarvis is empowered to pressure Devlin into investigating the matter. The sooner the real killer is found, the sooner the pressure will be off the Prince.

But nothing is ever that simple and Sebastian will have to make his way through a maze of lies, political intrigue, and startling discoveries about his own past before he can get to to the bottom of the mystery. A plot against the House of Hanover is tangled with personal retribution, but discovering who might want revenge against a beautiful young woman isn't as easy as looking at the Marquis's nephew. The nephew was the heir apparent until he learns that his elderly uncle was an expectant father. Fitting Bevan Ellsworth up as the murderer would be satisfying, both to Sebastian who never liked the man and to the Marquis who desperately wants someone else to inherit. But Sebastian has standards and won't accuse Ellsworth without proof. Proofs soon come (after a few too many more deaths)...but they lead to a very unexpected answer.

Once again Harris sweeps the reader back to Regency England. Sebastian is a good, solid character with a fine streak of decency running through him. He doesn't want to tidy up the murders with the least fuss for those of his class. He wants the right killer found and brought to justice for what they did--whether high born or not. He also cares deeply about Tom, the young boy he has rescued from the streets and who now serves as his tiger (to care for and mind his horses when out and about), and feels the injustices that face children like Tom who have to make their own way in the world. Sebastian is someone you definitely want on your side when you're up against it--just, intelligent, and a good man in a fight.

It is also interesting how Harris weaves Sebastian's back story into the mystery plots--just enough to keep a running thread in the various books, but not so overbearing that it completely dominates nor so much as to make the connections unbelievable. It will be interesting to see where this takes us in future books. Another good historical mystery. ★★★★