The Clue in the Diary 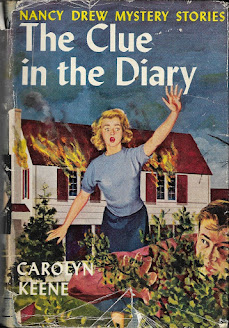 The Clue in the Diary (1932) by Carolyn Keene (original text)

Nancy, Bess, and George are on their way home from a carnival where they befriended a little girl and her mother. Mrs. Swenson and her daughter Honey seem to be in dire straits and the three young women take it upon themselves to see that the Swensons are able to enjoy themselves at the fair. As Nancy is driving back to River Heights, they witness a house go up suddenly in flames and they rush to the scene to give what aid they can. The house belongs to a Mr. Felix Raybolt (known as "Foxy Felix") and none of the neighbors appear to be too upset that the man's house has burned down. Rumors are that he has defrauded several people of their rights to patents.

Nancy sees a man run from the scene and then finds a diary that he apparently dropped. Her researches reveal that the diary belongs to Joe Swenson--Mrs. Swenson's husband who has been missing. When Mr. Swenson is found and arrested for starting the fire--and possibly killing Mr. Raybolt whose wife swears he was in the house at the time of the fire, it's up to Nancy and her friends to clear his name and help the Swansons get back on their feet.

When I read the Nancy Drew books growing up, Diary was one of my favorites--primarily because it introduces Nancy to her long-term "special friend" Ned Nickerson. Ned is also at the fire and Nancy first sees him moving her car...away from the sparks (he says). At first she's a bit suspicious that he chose her car ("obviously the most expensive model parked there"), but Ned soon proves himself and becomes another helper in the effort to clear Mr. Swenson.

I enjoyed revisiting this entry from my childhood From what I remember, they didn't change the story much. And certainly not as much as some of the titles where they completely changed the plot. A fun, quick read. ★★★★

Labels: BC by Erin, Mount TBR, Pick Your Poison

I never read Nance Drew, but was touched by your review. Happy for you that you enjoyed revisiting this childhood favorite.