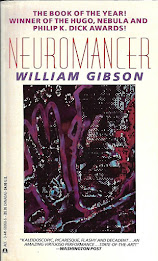 [Synopsis from Britannica] Neuromancer follows its protagonist Case, an unemployed computer hacker who is hired by a mysterious new employer called Armitage. He's teamed with Molly, a cyborg, and Peter Riviera, a thief and illusionist, to carry out a series of crimes that set the stage for the group's ultimate purpose, which is played out on the orbiting space station called Freeside, home of the wealthy Tessier-Ashpool family. The family has created two artificial intelligences (AIs), Wintermute and Neuromancer, that are so powerful that they can only be connected at a single point. Case and his cohorts learn that they have been hired by Wintermute to break the separation between the AIs.

Reading this, I have discovered that cyberpunk is definitely not my thing. I found the book equal parts confusing, annoying, and offensive (mostly in language). The scenes jumped around and the characters spoke in jargon that we were expected to just soak up like a sponge, I guess. But none of it stuck with me. It's possible this sort of science fiction might have gone down better with me when I was younger, but it's not the kind of science fiction that appeals to me at this point of my life. I can see that the story has ground-breaking concepts and I understand why it won the awards that it did--it just didn't do anything for me.★★

First Line: The sky above the port was the color of television, tuned to a dead channel.