A Study in Scarlet Women 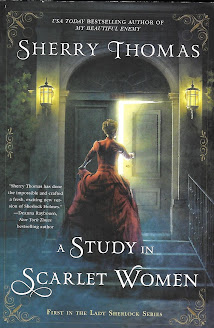 Charlotte Holmes has always been an unsettling girl--quick of observation and a bit lacking at first in the social graces. She knows one thing--she doesn't want to have to get married and be beholden to any man for her living. But forging her own way in Victorian society is no easy task and she has to make herself a social pariah before she can make a start. Meeting up with a rich widow by the name of Mrs. Watson, gives her the chance she needs.

Then there is a set of unexpected deaths and Charlotte's sister and her father each fall under suspicion. In an effort to dispel suspicion, Charlotte sends a letter under the name of Sherlock Holmes that points out certain discrepancies in the findings of the police and the doctors and soon finds herself consulted by Inspector Treadles of Scotland Yard (through a ruse where he thinks he's consulting her sickly brother "Sherlock"). It will be a desperate struggle to find the connection between the three deaths and to bring the crime home to the proper villain.

So....I like Charlotte Holmes a lot. If I separate out the part where we totally ditch Conan Doyle's creation in favor of Charlotte, then I really enjoyed the book and thought the mystery well done.  I enjoyed the relationships between Charlotte and her sister, between Charlotte and Lord Ingram, and between Charlotte and "Mrs. Watson," I thought the development of Charlotte's character over the book was realistic and interesting and I very much appreciated the strong female characters. What don't I like? Totally ditching Sherlock Holmes in a Holmes story. So now we have a fictional character who is really the made-up "disguise" for another fictional character. Because we couldn't figure out a way to have a brilliant, unconventional female detective character in Victorian England without co-opting the most famous detective in all of mystery fiction.

I could definitely have gone for Charlotte as the unmentioned sister of Sherlock & Mycroft Holmes (because women--like children were supposed to be seen but not heard in Victorian times). Or a cousin. I'm all for pastiches that build on the world and characters of an author--without damaging it in any real way. But I am a bit tired of modern authors completely rewriting Doyle's work. I've suffered through versions where everybody (including Mycroft and Dr. Watson) were in the pay of Professor Moriarty. I've read a pastiche where Mrs. Hudson was really a young hottie that Holmes was interested in (like Dr. Watson, who had an eye for the ladies, would have neglected to mention that little tidbit). I've watched Moriarty come back from the dead in so many ways and even had a few other baddies who had been reported dead reappear (because "we" couldn't come up with our own villain, apparently). Now we have a version where there is no Sherlock (as we know him), no real Dr. Watson, and no real Mrs. Hudson. I wanted to love this book--I almost do. But ★★★ and a half is pretty close.

First Line: Had anyone told the Honorable Harrington Sackville that the investigation into his death would make the name Sherlock Holmes known throughout the land, Mr. Sackville would have scoffed.

Last Line: Looking back at her, he said, "From the beginning, Holmes. The very beginning."

I do like the twist on character here, but I agree there can be too much of a good thing when there are endless reimaginings of the same thing.
Thanks for sharing your thoughts

If you like female pastiches for Sherlock Holmes, there are two that I heartily recommend:

First is the young adult Enola Holmes series. This deals with Sherlock's younger sister. She is quite a bit younger than Sherlock and Mycroft (I think she is 13 in the series, while Holmes is in his 30s, and Mycroft might be close to 40. Their mother goes missing, and she has to fend for herself while kind of staying a fugitive from her brothers as they want to send her to a finishing school to "be a lady". She proves to have the intelligence of the Holmes boys (the "Homies"? **That's just my little joke; they are NEVER called that!**) It really is a wonderful series.

The other is the Irene Adler series by Carole Nelson Douglas. Adler was THE WOMAN to Holmes; the heroine from "A Scandal in Bohemia" It is one of my favourite series of books, and I think you'll love it!

Both series have very little or no cursing, no real violence (The Irene series does have murders, but nothing gruesome) and no sex.

I read two of the Douglas books back when they first came out (long before I wrote any reviews) and enjoyed them very much. I just recently found out about the Enola Holmes books, but haven't managed to read one yet. I like the idea of a younger sister to Holmes WAY better than what happened here.

Please let me know when you read Enola; I would very much enjoy "hearing" your thoughts! And if you liked the Douglas books, why did you stop with 2? (If I may be so bold to ask?)

Sean: As far as the Douglas books go--just a case of "too many books and too little time," I think. I'm sure I just got distracted by some other awesome-looking book and went down a rabbit hole of reading that led me elsewhere. It was around the time I was heavy into my science fiction reading phase as well.

I understand. Well, I know how you like audiobooks (as do I-when I am not isolated by the virus, my work involves long drives, so I listen to audiobooks then), and the first 4 books were released unabridged on audiocassette. They were never put on CD, but I digitised them some time ago. If that is something you would like, let me know. Books 5 & 6 are part of the same story (it ends on a cliffhanger) and I think each book is around 500 pages, so there is some time involved. I read them a few times, but again, it took awhile