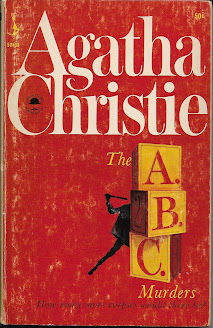 Crime is terribly revealing. Try and vary your methods as you will, your tastes, your habits, your attitude of mind, and your soul is revealed by your actions. [Poirot]

A serial killer takes on Hercule Poirot and his little grey cells--sending taunting letters to announce their murders. The first letter tells Poirot to keep his eye on Andover on the 21st of the month. When the 21st arrives, Mrs. Ascher is is found bludgeoned to death in her tobacco shop. The next letter predicts a murder in Bexhill-on-sea...and Betty Barnard is found strangled to death on the beach. Each letter is signed A.B.C. and an ABC railway guide is found on or near the bodies. How far will the killer get through the alphabet before Poirot can bring his man to justice?

Relatives of the victims band together to form The Special Legion and offer their services to Poirot in an effort to help find the killer quicker. They have no faith in the police and, especially, in the rather arrogant Inspector Crome who seems to think he knows everything about everything. They gather together in Poirot's apartment to share what little information they have and to ask him to give them assignments to find out more.

The difficulty is that there are very few clues--other than a nagging feeling that Poirot has that there's something not right about the letters themselves. And then a possible villain--with the fateful initials A. B. C. is caught with numerous pieces of evidence on his person and in his room at a boarding house. But, again, Poirot believes there is something not quite right about the culprit they've been presented with. He has to go back to the beginning and discern just what it is about those letters that isn't right.

I enjoyed having Hastings come back from South American to go "hunting once more" (as Poirot puts it) with his old friend. The Poirot stories are so much better when he has his "Watson" by his side. Their exchanges were just humorous enough to prevent a serial killer mystery from getting too dark. It was also good to see Poirot show up the young, very-full-of-himself Inspector Crome who seems to think the elder detective is past it.

Christie tries something a little different with this one--switching periodically from Hasting's viewpoint to that of our possible villain. In fact, the whole thing has just a bit of difference--from the impersonal serial killings to the multiple viewpoints to Poirot working with The Special Legion. There are red herrings, but not quite in the way of things in a standard closed-circle mystery plot. It's really quite interesting and enjoyable. ★★★★

First line: It was in June of 1935 that I came home from my ranch in South America for a stay of about six months.

Last line: So, Hastings--we went hunting once more, did we not? Vive le sport.

Deaths = 4 (two hit on head; one strangled; one stabbed)

This has been a popular read this year and I’ve seen it on blogs quite often. Thanks for sharing your thoughts

I know that Murder on the Orient Express is the most famous Poirot book (and possibly the most famous Christie book), but the ABC murders, and the Murder of Roger Ackroyd are my two favourites. This one is so deliciously Christie, with the multiple murders, the taunts to Poirot, Hastings' viewpoint, and the little grey cells!

And I agree about how Hastings being in the story makes a better read. So, why is Roger Ackroyd my 2nd favourite then? Well, **SPOILER ALERT**, I found it wonderful to have a Hastings stand in, and then find out that he is actually the killer! Such a twist!

Still, I think ABC edges that one out a bit. I actually like the PC Hawke mysteries (a turn of the century (21st I mean) kids mystery series by Paul Zindel which is especially distinguished by the fact that it deals with murders. I personally don't know if any other children's mystery series that does.), and I think "The Email Murders" which is enough of its own story to not be a shameless copy, still takes a lot of its inspiration from this novel.

(I'm sorry, instead of just commenting on this book, I brought in 2 more books. I hope that's ok)

One more question: do you have the books you review listed somewhere? I would love to see a list so I don't have to blindly stumble thru your blog trying to find something I read to read a review of