Murder at the Vicarage 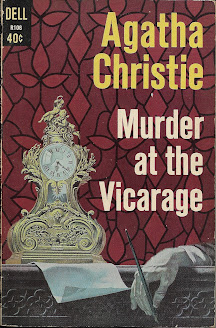 Murder at the Vicarage (1930) by Agatha Christie

Miss Marple is a white-haired old lady with a gentle, appealing manner--Miss Weatherby is a mixture of vinegar and gush. Of the two Miss Marple is much the more dangerous. (14)

And so we get the first glimpse of Miss Jane Marple, spinster and student of humanity, in her very first novel. She arrives on the scene for a dose of "tea and scandal at four-thirty" in the vicarage drawing-room where the ladies of the village gather to share their weekly observations of their neighbors. Some relish in the forbidden nature of gossip. Some are truly vicious in their comments. But Miss Marple is just plain interested in what makes her neighbors tick. She enjoys observing little things that help her solve the little puzzles of village life. She's often wondered if solving a really wicked crime could work in the same way.

She certainly gets a chance to find out when Colonel Protheroe, a very unpopular church warden and magistrate, is found shot to death in the vicar's study. Miss Marple isn't the only one interested in the murder. The Vicar's nephew is just at the age to think it's ripping great fun and decides to play detective himself--hunting for clues and discovering footprints.

At Dennis's age a detective story is one of the best things in life, and to find a real detective story, complete with corpse, waiting on one's own front doorstep, so to speak, is bound to send a healthy-minded boy into the seventh heaven of enjoyment.

They each have a go at solving the mystery, though Miss Marple is the more dedicated of the two (Dennis is slightly distracted by Protheroe's beautiful daughter). There are conflicting bits of evidence: a clock that doesn't tell the time that it should, a note that couldn't have been written when it says it was, a shot heard in the woods--but not in the house, two separate confessions to the murder, and an attempt to plant some incriminating evidence. And, since the colonel was disliked by so many, there are plenty of suspects. There's his current wife, who discovered quite quickly that Protheroe was not at all easy to live with. And his daughter, Lettice, who doesn't like being ordered about. There's the young poacher who got a stiff sentence and has vowed revenge. There's artist who has been painting Lettice's portrait (she in her bathing dress!) and has been forbidden the house. And there's the mysterious Mrs. Lestrange, a true stranger to the area, who paid a call on the colonel one evening when his wife was not home. Why, even the Vicar was heard to declare before the actual event "that anyone who murdered Colonel Protheroe would be doing the world at large a service."

I've thoroughly enjoyed the Agatha Christie challenge which has me reading all of her mysteries in publication order--something I had never done before. When I first discovered her novels, I just read whatever I could find in whatever order I could find it. And I thoroughly enjoyed this first novel-length glimpse of Miss Marple. She, as Christie fans know, has a knack of figuring out who-dunnit by association. Certain habits or turns of phrase or ways of doing things remind her of something or someone completely different--and yet the association leads her unerringly to the culprit. I love watching her disclose her insights to the Vicar or Inspector Slack...or Colonel Melchett (the Chief Constable).

It was also interesting to see Miss Marple and village life through the eyes of the Vicar (our narrator). He doesn't see things as clearly as he thinks, but that helps the red herrings along. His interactions with all of the characters give readers a lot to think about when trying to figure out who-dunnit themselves. ★★★★ for a lovely Golden Age visit with Christie's characters.

Mind you, I name no names. That wouldn't be right. But I'm afraid there's a lot of wickedness in the world. A nice, honourable, upright soldier like you doesn't know about these things, Colonel Melchett. [Miss Marple; p. 65]

I don't know what Miss Cram considers are the necessary qualifications for being murdered. It has never struck me that the murdered belong to a special class, but doubtless she had some idea in her golden shingled head. [p. 67]

Isn't it extraordinary? What should she want with a suitcase at twelve o'clock at night?...I daresay it has nothing to do with the murder. But it is a Peculiar Thing. And just at present we all feel we must take notice of Peculiar Things. [Miss Marple; p. 127]

Nothing about a crime is ever ordinary. The shot was not an ordinary kind of shot. The sneeze was not a usual kind of sneeze. It was, I presume, a special murderer's sneeze. [p.185]

The point is that one must provide an explanation for everything. Each thing has got to be explained away satisfactorily. If you have a theory that fits every fact--well, then it must be the right one. [Miss Marple; p. 195]