Murder in the Dog Days 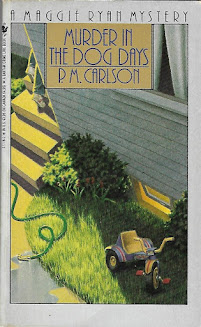 In the middle of a 1970s sweltering heat wave, Maggie Ryan, Carlson's intrepid amateur sleuth, and her husband Nick join up with Maggie's brother Jerry, his wife Olivia to go to the beach with Olivia's colleague Dale Colby and his family. Olivia and and Dale are reporters for the Mosby Sun-Dispatch and Dale is in the middle of a big story involving the blown-up plane belonging to a high-profile senator. The senator wasn't on the plane--but two of his aides and the pilot all died. Dale is trying to discover if the culprit was a terrorist or if there was a more personal motive to the attack.
At the last minute, he decides to forego the beach trip, sending everyone away while he works on his story. When the group returns that evening, they find the door to his study locked from the inside and no response to their knocks. They break the door open and find Dale dead in a pool of blood--having apparently been hit over the head with a table lamp. But how did the murderer get in and out? All the windows are also locked and there's no way anyone could have gotten out the door.
Vietnam nursing veteran, Detective Holly Schreiner takes charge of the investigation and soon finds herself faced with numerous suspects--from the most obvious wife Donna to the equally likely ex-wife Felicia (constantly angry because Dale was behind on child-support) to disgruntled family members of those killed in the plane accident to rival reporters. Lots of suspects, fewer motives, even less opportunity...and some even come with handy alibis. Running through the entire story is a thread of connection to the Vietnam War as well as disquieting relationships. Schreiner will have to face some of the demons of her veteran past as she sorts through the clues surrounding the present case.
This was an interesting peek at the time period just after Vietnam. Carlson writes with real insight and compassion about those who have been there and the reactions they faced upon their return as well as the personal conflicts they had to deal with. The mystery plot was also handled well and I enjoyed seeing how she resolved the impossible crime element of the locked room. I had an idea about that which was in the ballpark but wasn't quite right. I missed the vital clue that would have pointed me in the proper direction.
Maggie Ryan is an interesting amateur sleuth. Not only is she very observant, but she really understands people and has a good dose of compassion for those involved in the murder. She's unsettling for Holly Schreiner because she unwittingly becomes a symbol of some of the detective's buried memories from the conflict. The two have a very prickly relationship until a critical moment with the victim's daughter allows Maggie to help both the daughter and Schreiner face up to their very separate griefs. Overall, a fine mystery and character examination. ★★★ and a half.
First Line: The big graying air conditioner in the window of the so-called city room of the Mosby Sun-Dispatch groaned piteously.
Last Line: Holly hesitated, then returned the salute. "Peace," she said and went back out into the night.
Deaths = one (spoilerish--would give away the "how" of the story--will file under "other")
Posted by Bev Hankins at 9:43 PM