Footprints Under the Window 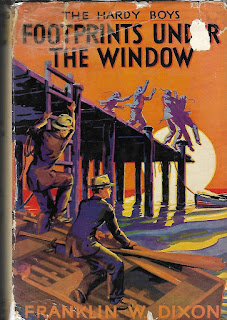 Footprints Under the Window (1933) by Franklin W. Dixon

Frank & Joe Hardy are fending for themselves in Bayport while their mom and dad are out of town on a trip. They know their dad is in the middle of a big case and is possibly using the trip as a cover. Then they get word that their Aunt Gertrude is about to descend upon them (as she always seems to do when she hears the boys are left at home)--little do they know that she will be the catalyst that sends them into a mystery as well.

For when they go to meet the boat she planned to arrive on, there's no Aunt Gertrude--only a man by the name of Simon Pebbles who tells them their aunt had a minor accident on the dock and wasn't able to make the trip after all. She had asked him to stop in Bayport and phone the Hardys to give them the news. Pebbles winds up missing the ferry and Frank & Joe invite him to spend the night at their house. When they wake up in the morning, they're surprised to find Pebbles gone, papers missing from their dad's things, and...Aunt Gertrude lying on the front room floor.

She's very groggy and feels ill and insists that she saw a Chinese man staring at her in the night. It seems she didn't miss the ferry, but became extremely drowsy and slept through the first stop at Bayport. She was awake enough to get off when it made its return trip in the early morning hours. But what about the Chinese man? It seems that Chinese folks are going to figure very prominently--when the boys took a huge load of laundry to the local Chinese laundry (trying to prepare for their aunt's surprise visit), they found the very friendly Sam Lee replaced by a nasty man by the name of Louie Fong. Then when they search around the house for clues to explain Pebbles disappearance, they find a piece of paper with Chinese writing in addition to some mysterious footprints.

Next up...a man who says he hired Fenton Hardy to investigate claims that he (the man) was smuggling Chinese illegally into the States appears and demands that the boys tell him where their father is. Since they don't know, Frank & Joe decide to investigate on their own. All the clues seem to point to the laundromat and the change in ownership....but who is the man who left the footprints under their window and who seems to be spying on the same people they're investigating? And what does Simon Pebbles have to do with it? They'll have to answer those questions before they can wrap up this mystery.

The story line is actually very pertinent today--with people so very worried about "illegals" getting into the country. As per usual, it is the immigrants looking for a new life who suffer the most. Here we have a gang of smugglers "helping" illegal immigrants get into the country and then exiorting money from them by blackmailing them about their status. There are, certainly, some disturbing racial stereotypes to be found here--but a point is made that while most of the Chinese encountered in the story can speak English perfectly well, they deliberately do not do so with white men so no one will suspect how intelligent they really are. And the ultimate bad guy of the piece isn't Chinese.

There is a lot of action--from thrown knives to falling down trapdoors to being chased by an angry wolfhound. There's also overheard conversations, disguises, urgent telegraph messages, and the drugging of innocent aunts. And, of course, the Hardys--Frank, Joe, and Fenton--get their man/men in the end. ★★★