Between the Thames & the Tiber: The Further Adventures of Sherlock Holmes 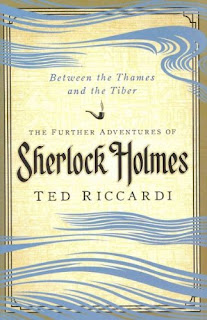 So...after a much longer hiatus from reviewing than planned, I'm back with a short review of Between the Thames & the Tiber (2011) by Ted Riccardi. Short--because I listened to the audio novel version as I traveled to and from my parents' house last week to provide support while my dad underwent surgery (thus explaining a week of the radio silence) and I have difficulty doing in-depth reviews of books I listen to rather than read (especially if it's the first time "reading" them).

The audio novel version made pleasant listening through most of the stories. Simon Prebble does an excellent job representing Holmes and the good Doctor as well as providing distinctive intonations for the various characters they meet in their adventures. I found most of the stories to be just intricate enough to keep my interest while driving, but not complex enough to frustrate me if I happened to miss anything while concentrating more intently on traffic situations when necessary. I do have the distinct impression (supported by various reviewers on Goodreads) that the plots might not hold up to the greater scrutiny I could give them if I read the hard copy book.

And there were definitely a few frustrating details that I noticed even though I was listening and not reading. The adventures are not given in chronological order; they jump back and forth in time with one story taking place before Moriarty died and yet it isn't given a flashback feel. It is produced as if it just naturally comes next after a story that takes place in the early 1900s.  Several of the adventures--particularly in the latter half of the audio novel--quite simply do not have a resolution. The culprits are not caught and in two of the stories you don't even know for sure who culprit was. The story just ends as if Holmes had given up which is not at all what one expects of the world's greatest detective. In addition, Riccardi introduces a lady-interest (not enough happens that we could call it a love-interest) for Holmes in one of the first stories and then she just disappears. Watson makes remarks in his introduction to the stories about how influential this relationship was on Holmes and yet we are given no evidence of any such thing.

What I enjoyed most about the collection was the relationship between Holmes and Watson. Riccardi gets that right (for the most part). The friendship between the two is quite evident and portrayed well. Prebble's reading helps to emphasize this. Also, Watson is, as he should be, not as observant and intelligent as Holmes, but he is not the bumbler or fool that is sometimes his lot in pastiche (or in the Rathbone/Bruce films). ★★★ for a pleasant audio novel experience.

*****************
Deaths = 7 (one poisoned; one hit on head; three shot; one electrocuted; one natural causes) [There were actually more--but since I listened to this and didn't read it, I don't have a good record and can't name any of the others as a certainty]

Hmm...! I don't know why other authors have to take up already established authors and their characters. I was not aware that it was done for Sherlock Holmes. I know it has been rather frequent for Jane Austen, but I am biased.

I recently read several stories by Conan Doyle. I have never really read them before, only watched films and tv-series. I was quite impressed by the writing and the stories and found them all rather fascinating.

Sometimes it is best to stick to the original.

Sherlock Holmes is one of the the most used characters of all time. There are many really good ones, more that are just so-so, and also a lot that are very bad indeed. I love the original stories and have also enjoyed quite a number of the pastiches I have read.