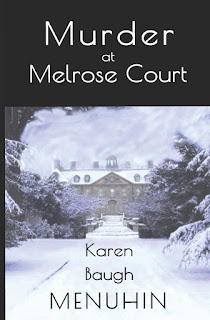 Menuhin has set her historical mystery series right in the middle of the Golden Age. This debut novel takes place at Christmas time in 1920. Major Heathcliff (please don't call him that) Lennox discovers a dead body on his doorstep. It is established that the man died of a heart attack, but the local police are still suspicious that Lennox knows more than he tells. Which he does. The man had a scrap of paper in his pocket with the name "Countess Sophia Androvich Zerevki Polyakov" on it. The major tells the police that he has never met the woman--which is, strictly speaking, true; but it's a good thing he didn't say he'd never heard tell of her.

Following on the heels of the deadly discovery, Lennox receives a telegram from his Uncle Charles Lennox insisting that he come home to Melrose Court for the Christmas holidays because he has "important news to impart." The important news? Uncle Charles...long confirmed bachelor, tottering around with his walking stick...is engaged to be married. To (you'll never guess...) the Countess Sophia Androvich Zerevki Polyakov. Other family members are on deck and Uncle is going to change his will.  But Uncle Charles is a jolly fellow and we like him, so (unlike many of the Golden Age mysteries written in the 1920s and 30s) he isn't the one who gets murdered. The next dead body to make an appearance is...(you'll never guess) the Countess Sophia Androvich Zerevki Polyakov. And our hero finds himself standing over her, having stupidly picked up the gun lying beside her--because it was his gun and what's it doing there, darn it? Now the local police are really suspicious of him and pretty much the whole house thinks he's a murderer. But he's not and now he's got to prove it. A couple more dead bodies, several red herrings, and a handful of clues later he does. And in classic Golden Age style, he gathers everyone together for a final reveal-all scene.

This was a pleasant first mystery novel. I enjoyed seeing many of the familiar Golden Age tropes employed--sometimes with a bit of a twist. The overall historical feel of the book is good and I appreciated the humor and witticisms strewn throughout. My primary concern with the novel is Major Lennox. His character just doesn't interest me as much as the protagonist in a series should. There are glimmers of a character I could enjoy over the length of a series, but it's not fully realized--not as much as one would like upon a first meeting. I do have hopes (given the glimmers) that Menuhin will build on the major's character in future books and I enjoyed the novel enough to be ready to try the next one when the occasion arises. ★★★ and 1/2.