Between the Devil & the Duke 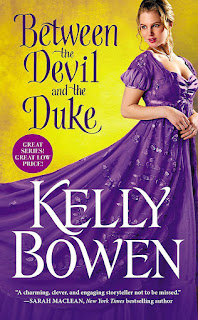 Between the Devil & the Duke (2017) by Kelly Bowen is a regency romance novel with heavy doses of mystery, intrigue, and murder. It features Lady Angelique Archer who bears the weight of her family's troubles on her shoulders. Her mother died five years ago from a mysterious illness. Then her father, the Marquess of Hutton, died during a hold-up by a highwayman, leaving his family with far less money than anticipated. The family solicitors hem and haw about the difficulties, but it boils down to the fact that the Marquess sold off all of his property save the family home in London and the proceeds from those sales have disappeared into the ether. No one knows why he was selling or where the money went.

Lady Angelique's brother (now the Marquess) is a wastrel--frittering away what little money was left on wine, women, and song--and she is at her wit's end as to how she can keep things together. She has sold everything in the house that could be converted into cash and still isn't going to be able to meet the bills--including the school fees for her twin younger brothers. But the lady has a skill that she can put to use. She has extraordinary mathematical abilities and decides to use those abilities to allow her to count cards at society's gambling dens. She's turning a fair profit and managing (she thinks) to draw little attention to herself in the process....

But Alexander Lavoie, owner of the club she's been frequenting, has noticed her. He noticed her the moment she walked in and has watched the masked woman work the cards like no one he's ever seen before. He doesn't mind because she's been playing vignt-et-un and relieving some rather despicable members of the ton of their money. More than that, he doesn't mind because she fascinates him and he wants to find a way to discover who the lovely lady behind the mask is. Opportunity falls into his lap one night when one of his customers becomes more than unusually upset at having lost and accosts her. Even though it's clear that the woman can handle herself, Lavoie takes advantage of the situation and steps in as owner. He uses the situation to find out more about her and offers her a job dealing the cards for a vingt-et-un table--where she'll be able to make money for the house (and considerably more for herself with percentage he guarantees).

One thing leads to another and, of course since this is a romance novel, sexual tension starts running all over the place. Alex keeps telling himself that he must keep business and pleasure separate, but we all know that's not going to last long. Angelique is too alluring, too clever, and too able to make him a good partner in all ways. On her side, she keeps telling herself that she had a lucky escape from an really bad engagement and that she doesn't need a man to interfere in her affairs, but that's not going to last long either. Alex is too handsome, too easy to talk to, and too concerned about her for her to walk away from. And she does wind up needing his help...

Her wastrel brother gets framed for a murder he swears he didn't commit and Alex has connections that can help get to the bottom of the plot. And plot it is--someone has hated the Archer family for at least five years and is willing to kill repeatedly to get the revenge they feel due. The budding romance has to go on hold while Angelique and Alex follow the twisting trail to a surprising culprit.

I don't read a lot of romance novels anymore...but this fit right into a challenge category that I was having difficulty with, so I snatched it up from the library. It was a pleasant surprise to find a murder mystery plot receiving equal time with the romance--and to find it to be an interesting mystery plot. I thoroughly enjoyed the relationship between our two protagonists and I have to say that my favorite scene occurred after they had sneaked into the Tower to visit her imprisoned brother. They are making their way out when they hear guards coming. Alex (who is dressed in his old military uniform) tells her to hide while he tries to talk his way out of it and he spins a story about his general sending him to look up records (they're caught in some sort of records stash area in the Tower). The guards aren't buying it and Angelique, who is dressed in male clothing with hair stuffed under a hat, bustles out and plays the pompous secretary to the general to perfection. It's a delightful scene.

Overall, an enjoyable read, though I do prefer older regency romances (such as those by Georgette Heyer) with less emphasis on the sex. This one mitigates the sexy bits by offering up a nice, juicy mystery. ★★★ and 3/4