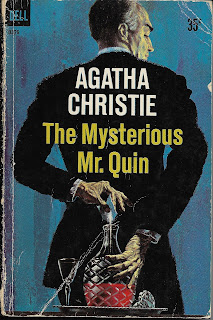 The Mysterious Mr. Quin (1930) by Agatha Christie is a collection of short stories that feature Mr. Satterthwaite and Mr. Harley Quin. Satterthwaite is an elderly gentleman in his sixties with the means to travel where he likes and indulge his artistic and epicurean tastes. He also has a love of drama--no, not necessarily on stage but real-life human dramas as they are played out all around him. Throughout his life, he has been an audience of one, watching and studying human nature at its best and often at its worst. When Quin first enters his life, he knows right away that some intriguing drama will follow. Quin will not be the central character, but he will be the catalyst that puts it all in motion. And he's right. Twelve times he is right.

Quin is a mysterious man who appears on the scene as if from nowhere. He has a knack of encouraging the actors in the human dramas to see and understand things in ways they were unable to before. This helps (in these stories) primarily to sort out old tragedies, to help bring justice where needed or just relief of suffering. He also encourages Satterthwaite to get up off the sidelines and get involved in the dramas himself. At first this disconcerts Sattherthwaite, but he soon learns to enjoy the ways his friend uses him to clarify mysteries.

Since these are short stories, the mysteries are not given in great detail but they do have a depth of human emotion and interest. There is also an otherworldly, supernatural feel to the stories. We get a sense that Quin is an agent from beyond the normal human realm and he is described several times as a "speaker for the dead." His ability to appear and disappear from the scene--as if by magic--is but one of his supernatural qualities. In at least two of the stories, there is literally nowhere for him to go without injuring himself and yet go he does.

These are enjoyable little vignettes that allowed Christie to play with the mystery story while adding a dash of the unknown. I think she must have had a great deal of fun putting these together. ★★★ and 1/2.

This is one of those books I have really been meaning to re-read, as I feel like we get to see a more experimental Christie. I also remember there being a story involving a radio as a murder weapon, which was quite inventive for Christie.

I enjoy the Quin stories. They're different than Christie's usual.