Who's Sitting at Your Table?

This week on Larissa's Bookish Life Tanya (filling in for Larissa while that lucky lady is at the Authors After Dark Conference in NYC) is asking us Who's Sitting at Your Table? If you could invite any six authors to dinner for conversation and gossip, who would you choose? 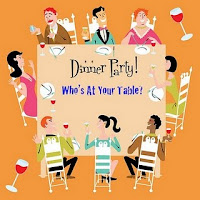 I'm assuming my magical hostess powers will allow me to use time travel to bring authors form the past to 2010. Here we go, in no particular order:

1. Dorothy Parker...the queen of NYC gossip in her time and the author of some pretty insightful essays as well as short stories and witty poems.
2. Dorothy L Sayers...not only would I want to talk about her literary creation, Lord Peter Wimsey, and all the literary allusions and quotations found in those novels, but I'd want to talk to her about her religious views as well.
3. C. S. Lewis...Let's put him beside DLS. That should make for some very interesting religious commentary.
4. David Lodge...master of the British academic satire. He and I could dish on the academic life all night.
5. Jane Austen...I'd love to hear her talk about the manners and customs of her time (live and in person) as well as hear her take on ours.
6. Sir Arthur Conan Doyle...let's just see if he can use the skills of his most famous creation to tell the group all about ourselves. I'd also like to quiz him about his views on spiritualism.

There we go...whose names will be on your invitations?