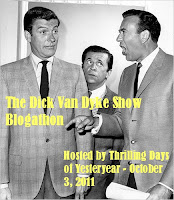 Today marks the 50th Anniversary of the launch of The Dick Van Dyke Show on CBS in 1961. My husband has been a long-time fan of the show and I am allowing him to guest-blog so we can participate in the Thrilling Days of Yesteryear's Dick Van Dyke Show Blogathon. Please visit the site to see who else is joining in on this very festive occassion.

Brad (the hubby) has maintained a Dick Van Dyke Show webpage of his own called the The Petrie Page since July 1999. Feel free to hop on over and check out all of the material he has collected over the years. As his contribution to the blogathon, he'd like to offer up some of the quotes he's accumulated and some bits of trivia from the show. 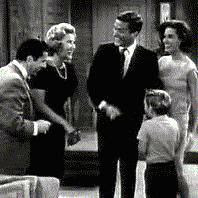 Favorite Quotes:
"There was something ageless with him. Probably 100,000 jokes in his head went with him." ~Dick Van Dyke on the death of Morey Amsterdam, comic actor best known for his role as Buddy on The Dick Van Dyke Show

Laura: "You want to wind up another Dwight Heahteron? Go ahead!"
Rob: "Who's that?"
Laura: "Dwight Heatheron happens to be an excellent writer who is unknown because he gets no publicity."
Rob: "Then how do you know him?"

Laura: "Rob, let me ask you something. Are you doing this because you're afraid of Alan?"
Rob: "No, I'm doing it because I respect Alan Brady. A man of his caliber has great firing power."

Sally: "Time to go home and feed Mr. Henderson."
Buddy: "What kind of name is that for a cat?"
Sally: "This coming from a man who has a wife named pickles and a dog named Larry!"

Rob (to Laura): "...Washington said farewell to his troops in less time."

Alan: "Why didn't someone tell me? I would have worn my hair!"

Rob (to Laura): "Three out of four doctors will tell you that the cupcake test is not always conclusive."

Jerry (to Rob): "Listen, we can hug all you want at home, but on the boat, never touch me!"

Alan: "What do you suggest I do with all these toupees, now, huh?"
Laura: "Well, Alan, there must be some needy bald people...."

Buddy (to Sally): "My mother-in-law is spending a month with us for a couple of days."

Rob: "It's like being Clark Kent." Laura: "Huh?"
Rob: "You know you're Superman, but you can't tell anybody. I never realized how he must have felt. Can you imagine how many times in that booth he wanted to pick up the phone and say 'Hi! I'm Superman!'"

Rob (to Laura): "It just so happens that I know me better than you know me 'cause I'm with myself almost constantly."

Buddy: "Rob, I've done a lot of things in my life, but I've never Uhny Uftzed anybody!"

Sally (to Rob): "You feel sick or something, or has your brain just ran out of ideas?" 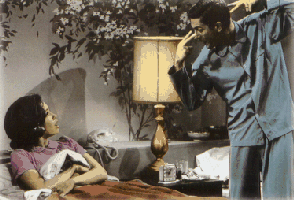 The show had two pilot episodes. It is one of the few shows, including the original Star Trek, that had a second chance.

"Head of the Family" was the first pilot episode. It starred Carl Reiner as Rob Petrie in 1958.
For the second pilot the producers of the show originally considered casting Johnny Carson as Rob Petrie.
More than 60 actresses were settled on before settling on Mary Tyler Moore.

"The Sick Boy and the Sitter" was the second pilot episode. It was filmed on January 20, 1961. The same day that JFK was inaugurated as the 35th President of the USA.

At first the series aired at 8 pm on Tuesday nights. However, Sheldon Leonard thought the show was too early for an "adult" sitcom and convinced CBS to move it to Wednesdays at 9:30 pm.

The show was canceled after its first season, but there are two different versions of the show's stay: 1)Sheldon Leonard convinced the network to let the show go on and 2) that Proctor & Gamble threatened to pull all of its daytime advertising off CBS soap operas unless the network found a spot for the program on the fall 1962 schedule.
In the opening, when Dick Van Dyke doesn't trip over the ottoman, he shakes Buddy's hand two times.
"The Gunslinger" was the last episode. It was filmed on March 22, 1966--two days before your guest-blogger was born.
The last episode aired on CBS on June 3, 1966.
There are 158 episodes.

And thankfully, the show has returned bathed in glory to TV Land (beginning this evening), who long ago was hyp-mo-tized by an evil TV programmer into thinking Extreme Makeover: Home Edition constitutes classic television.

Thanks so much for contributing to the blogathon, Brad...and of course, to Bev for letting you borrow the blog. (I don't know how we're going to explain that scratch to her, though...)

What fun to read all this Petrie trivia, Bev. Thank your hubby!

I'm going over to Netflix and watch me a bunch o' DVD episodes.