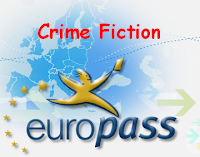 We're coming down to the final stages of our Crime Fiction Europass whirlwind tour. And we find ourselves stopping in Italy this week. Last week, for the Czech Republic, I found myself with no books on hand or in my reading list that suited and I had to do a little research. This week, I have two stops scheduled for Italy.

Up first is Tuscany, Italy. I actually visited Tuscany back in June via Mark Mills' novel The Savage Garden. This is the story of Adam Strickland, a Cambridge student, who is sent to Italy by his mentor to do research so he can finish his art history thesis. Initially Adam is seeking to discover the artistic secrets of the garden itself, but he soon finds himself drawn into two mysteries surrounding the Docci clan--owners of the villa and garden. One--what really happened to owner's wife, the woman who inspired the garden. And two--what happened to Emilio, the current owner's eldest son, who was killed during the German occupation--apparently by drunken German soldiers. His discoveries will shake the Docci clan lineage--and affect his growing romance with the daughter of the house. [For a full review of the novel, please feel free to click on the title above.]

Next stop is in Florence. This is a more recent journey. I just finished Death of an Englishman by Magdalen Nabb on September 25th in anticipation of this leg of our trip. This is Nabb's debut novel and it introduces us to Marshal Salvatore Guarnaccia of the Carabinieri. It takes place just before Christmas and the marshal is looking forward to taking the train South and spending the holiday with his wife and family. But first he must recover from the flu which has swept through the force and left them short-handed.....and also solve a murder. A reclusive Englishman, living in a flat on the Via Maggio near the SantaTrinita briddge, has been shot in the back during the night. He was well-connected and Scotland Yard dispatches two officers to "assist" the local police force. But it is the marshal, a quiet observer, not an intellectual, who manages to figure out what happened, and why. [Again, my full review may be found by clicking the title.]

Both of these stories were very enjoyable and I recommend them to anyone looking for an Italian get-away.
Posted by Bev Hankins at 8:58 PM