It's Vintage Mystery Sunday and time to step into my vault of classic mysteries and choose one to feature that I read and loved before blogging took over my life and I began reviewing everything I read. This week's featured book is Flowers for the Judge by Margery Allingham (1936). Although this is the seventh Albert Campion book written, it was my first introduction to Allingham's gentleman sleuth and his former burglar manservant, Magersfontein Lugg. Compared to many of the Golden Age queens of mystery (Christie, Sayers, Marsh, etc.), I came late to Allingham's work. It wasn't until I was married and living in a very tiny town with a very tiny public library that I found her. The interesting thing is I think that perhaps 60-70% of the library's fiction holdings were mysteries. All I can deduce is that some huge mystery fan must have willed their entire collection to the library....either that or the person in charge of ordering was a mystery addict. You'll hear more about some of my vintage mystery discoveries at this small town library in future Vintage Mystery Sunday posts. 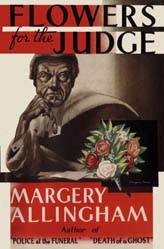 But...back to Flowers for the the Judge. This story begins with the strange disappearance of Tom Barnabas--a member of a family who owns a leading publishing house in London. He disappeared in broad daylight while walking down a London street. There is an investigation, but Tom is never found and the mystery soon loses public interest. The rest of the family keep the business going...and then twenty years later another member of the family goes missing. Enter Albert Campion. Universal uncle and friend to the family, Campion is called upon to investigate what happened to the missing cousin. This time the family is not left in doubt...the missing man is found dead in the manuscript vault. Suspicion falls on the youngest Barnabas cousin who was known to be in love with the dead man's wife. It is up to Campion to search through the family history to expose the murderer--but, as so often happens, he finds more than he bargained for. 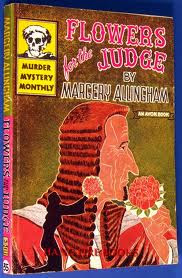 I remember being very taken with Albert Campion and Lugg. Like Lord Peter Wimsey, Campion obviously came from a wealthy, upper-crust family. He was definitely a gentleman. But he chose to go in disguise, so to speak, taking on an assumed name. I also enjoyed his relationship with Lugg. Lugg was certainly no Bunter. He was not the ideal "gentleman's gentleman," but he most definitely had qualities that were very useful to Campion. A very entertaining mystery that urged me to seek out more of Allingham's work.