So....we all know about my challenge habit, right? Okay. Then we won't be surprised to know that I've found another one. This one runs for two years though and I can use books that I've already read. It has its own dedicated site--click on the name to check out the site and sign up.

Here's the scoop on the Monthly Mix-up Mania Challenge sponsored by Book Dragon: 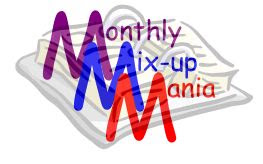 What: To read a book for each letter in the year. That's right, a title for the J in January and the A in January, etc.... 74 books total!

J Dr. Jekyll & Mr. Holmes by Loren D Estleman
A The Ampersand Papers by Michael Innes
N Who Needs Donuts? by Mark Alan Stamaty
U Use Trouble: Poems by Michael S Harper
A We Have Always Lived in the Castle by Shirley Jackson
R Rope's End, Rogue's End by E. C. R. Lorac
Y The Yellow Dog by Georges Simenon

F Flaubert's Parrot by Julian Barnes
E Emma by Jane Austen
B The Caravaggio Books by Bernard Peterson
R The Girl in the Green Raincoat by Laura Lippmann
U All Booked Up by Terrie Curran
A Zelda Sayre Fitzgerald: An American Woman's Life by Linda Wagner-Martin
R Roseanna by Maj Sjöwall and Per Wahlöö
Y The Yellow Room Conspiracy by Peter Dickinson

M Murder on the Links by Agatha Christie
A The Angel's Game by Carlos Ruiz Zafón
R The Trail of the Red Diamonds by Ron L Hubbard
C The Wyndham Case by Jill Paton Walsh
H Heavy Weather by P. G. Wodehouse

A An Author Bites the Dust by Arthur W. Upfield
P The Phantom of the Opera by Gaston Leroux
R Rosencrantz & Guildenstern Are Dead by Tom Stoppard
I The Innocent Bottle by Anthony Gilbert
L Ten Little Herrings by L. C. Tyler

J The Detections of Dr. Sam: Johnson by Lillian de la Torre
U Blood Upon the Snow by Hilda Lawrence
L The Lost Art of Reading: Why Books Matter in a Distracted Time by David L Ulin
Y You Can Die Laughing by A. A. Fair

S Something Wicked This Way Comes by Ray Bradbury
E The Vanishing Act of Esme Lennox by Maggie O'Farrell
P The Porcupine by Julian Barnes
T Scorpions: The Battles & Triumphs of FDR's Great Supreme Court Justices by Noah Feldman
E The Eustace Diamonds by Anthony Trollope
M The Man on the Balcony by Maj Sjöwall and Per Wahlöö
B Burial Deferred by Jonathan Ross
E Elegance by Kathleen Tessaro
R The Giant Rat of Sumatra by Richard L Boyer

O My Foe Outstretch'd Beneath the Tree by V. C. Clinton-Baddeley
C Panic in Box C by John Dickson Carr
T Time to Be in Earnest: a fragment of biography by P. D. James
O Oscar Wilde & the Vampire Murders by Gyles Brandreth
B Behold, Here's Poison by Georgette Heyer
E Evvie by Vera Caspary
R The Religious Body by Catherine Aird

D Death of a Doxy by Rex Stout
E Savage Beauty: the Life of Edna St. Vincent Millay by Nancy Milford
C Death of a Chimney Sweep by M. C. Beaton
E In the Teeth of the Evidence by Dorothy L Sayers
M Lord of Misrule by Jaimy Gordon
B The Bloody Wood by Michael Innes
E Electric City by K. K. Beck
R Robert Kennedy: In His Own Words by Edwin O. Guthman & Jeffrey Shulman, eds.

I've been wrestling with the Monthly Mix-Up Mania challenge since April, and even set myself some extra challenges like reading the books in the month they're assigned to. I'm enjoying it so far, hope you do too!

OK, well, I'm going to need to join you on this one! It looks like a load of fun!