Ruth over at Booktalk & More is very disturbed. And now that she's brought it to my attention, so am I. Did you know that Johnny Depp is going to star in a remake of the The Thin Man movie? That delightful screwball comedy/mystery featuring the marvelous William Powell & Myrna Loy? How do you compete with perfection? Now, I like looking at Johnny Depp (who doesn't?)--but this just doesn't seem right no matter how you look at it. Especially when I go HERE and find out that they're planning to "provide a contemporary attitude but retain the period setting of the 1930s." What the heck? 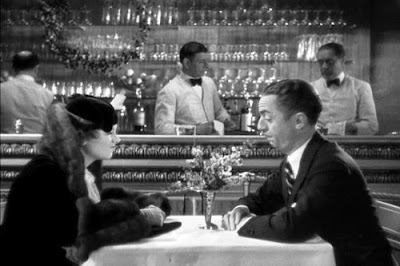 I am so glad I'm not the only one disturbed by this. What is this 1930s setting/contemporary attitude thing?! UGH!!! So frustrating! I am just so, SO partial to the original Thin Man...I just don't want to see its charm wrecked by modern Hollywood. Maybe they will prove me wrong but I don't know that I'm gonna risk holding my breath...

Surely to goodness there are plenty of terrific stories that haven't made it to film yet that they could tell those...instead of doing so many remakes! I'm not partial to remakes and they have to be pretty darn good to win me over.

That really is annoying. I don't see any actor living today that can play Nick & Nora Charles without ruining their memory.

It's like that really bad remake of The Women they did a few years ago. Hollywood needs to leave greatness alone.

That is just bad and wrong.

*headdesk*
Yeah, they are saying it's going to be like the new Sherlocks, which I know you've been avoiding. I really love the new Sherlocks, but I can't imagine this going very well......possibly I'd be more on board if Tim Burton were the director, because I'd know it would be a reinterpretation rather than a remake, but *shudders* I don't have a good feeling about this one.

There are also rumors that Rachel Weisz (from The Mummy series) is top pick for Nora---*runs screaming from the room. I'm busily horrifying people at the Lilly with the info.

Sounds like this is the new style of movie. The Robert Downey Jr/Jude Law Sherlock Holmes also had "a contemporary attitude" in a Victorian period setting. I was surprised how much I liked that movie - I tried to ignore all the absurd action sequences toward the end. I even like the Benedict Cumberbund (or whatever his name is) version on BBC. But this is what younger generation in the film business want to do. They have absolutely no appreciation of the past or history. And they seem to have no respect for vintage films at all.

Go to a revival house screening of an old movie (anything made between 1930 and 1960) and you'll hear uproarious youthful laughter throughout the entire film. Ridicule is in again. It's like living in 17th century France and being surrounded by snobby arrogant aristocrats who hurled cruel insults at each other for a lark. Laughter at the slang and colloquial dialog, laughter at smoking, laughter at excessive drinking, even laughter at murders. It's sickening. I can't go to the Music Box Theater anymore to watch old films. I'll only watch old movies on DVD these days.

I'd like to see a remake of THE THIN MAN that was truer to the way Hammett envisioned Nick Charles (who was Greek American) and the story which was grittier and less of a frothy cocktail. The fact that the series uses "The Thin Man" proves that Hollywood didn't even understand the first film. The title refers to the murder victim in Hammett's book not Nick Charles.

End of my rant. Geez, my mood just went from light to dark in the span of three paragraphs. I need some coffee and sugar now.

@John: Now see it didn't bother me at all that the movie Thin Man wasn't so true to the original (that would be because the gritty, hard-boiled stuff isn't my thing)--but I do see your point there. And I wasn't thrilled with the use of the "The Thin Man" in all the titles. But I do love the screwball comedy atmosphere.

I liked the new Sherlock Holmes movie too--more than expected. But I didn't like the fact that the chant "this is NOT Doyle's Holmes" and "Brett did it better" kept running through my head.

It is a shame that the younger generation can't appreciate the vintage movies for what they are instead of poking fun at what they don't understand or think sounds/looks odd.

Three lumps of sugar...one for each paragraph. :-)