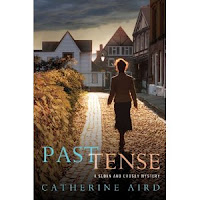 It's been a while since I've read a mystery by Catherine Aird. I first discovered her about twenty years ago. It's hard to believe that she's been writing her Inspector Sloan mysteries for over forty years. Of course now, in Past Tense--the most recent adventure written in 2010--he is a Detective Chief Inspector and the police have cell phones and computers at their beck and call. But the style is the same. Aird writes a very smooth, quick read. The mystery is complex enough to hold the attention and the characters are drawn with broad strokes, giving just enough information to flesh them out and keep them from being two-dimensional. Reading this one was like slipping into something familiar and comfortable. Not too taxing and thoroughly enjoyable. Not a spectacular read (like my previous one), but a nice cozy, comfortable mystery.


This installment revolves around Josephine Short--her life and, more importantly, her death. She has been living at the Berebury Nursing Home, just a short distance from her next-of-kin, a great-nephew and his wife. However, when the nursing home calls the couple to let them know the elderly lady has passed away, they are surprised. They had no idea she was living so close. More surprises follow. A young man who claims to be Josephine's grandson shows up for the funeral. Josephine had never been married and there had never been mention of a son--let alone a grandson. Sloan and his sidekick Detective Constable Crosby are called in when there is a break-in at the Nursing Home and Josephine's room is the only one disturbed. Nothing seems to have been taken, but Sloan is disturbed nonetheless. Finally, a young woman is found floating in the nearby river and it soon becomes clear to Sloan that all of these events must be related. What other secrets does the past (or present) hold for the Short family? And who would kill to keep them hidden?

As I mentioned, this was a nice comfortable read. Fast-paced and easily read in one evening's sitting. Just what you might want if you like cozy mysteries with a touch of police procedure and a puzzle that intrigues but doesn't demand a lot of brain-power. Three and a half stars.
Posted by Bev Hankins at 4:42 PM

Labels: 100 Plus, Outdo Yourself, Support Your Local Library