It's Vintage Mystery Sunday and time to step into my vault of classic mysteries and choose one to feature that I read and loved before blogging took over my life and I began reviewing everything I read. This week I'm bringing out Suicide Excepted by Cyril Hare.

Cyril Hare was the pseudonym of Alfred Alexander Gordon Clark who was an Engligh judge and crime writer. He chose his pen name as a mixture of Hare Court, where he worked in Roland Oliver's chambers, and Cyril Mansions, Battersea, where he made his home after marriage. His novels featured two main investigators, Francis Pettigrew--who was a barrister--and Inspector Mallett--a large police office with a huge appetite. He wrote nine detective novels which were published from 1937 to 1958. Suicide Excepted was his third book. 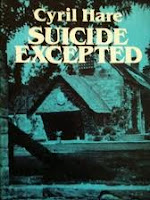 Suicide Excepted is a lovely mystery novel that would likely appeal to both mystery fans and general readers who are fond of British work. The novel is a combination of intricate puzzle, a bit of a thriller, and a slice of British life. It starts out with the death of an odd elderly man who has kept a scrapbook of rather morbid quotations. He has been staying at an obscure country hotel and it would be convenient if the overdose of sleeping medication were just an accident or even suicide. But is it that simple? Is there a cold-blooded murderer at work? For you see, his family stands to lose a tidy sum in insurance money if the verdict is suicide--and the family can definitely use the money. Contrary to most mysteries where no one wants a murder to have happened, the heirs begin drumming up evidence to try and influence a verdit of foul play. The amateur "sleuths" do find some interesting clues, but while they're beavering away, Inspector Mallett of Scotland Yard is following his own line.


Suicide Excepted works well as a traditional whodunit--there is a floor-plan, a houseful of suspects, and all kinds of suspicious activities going on behind the scenes. It also gives a humorous look at family life in 1930s Britain--with all the infighting between siblings and cousins. We are also given a good look at various levels of society. We are taken from the country hotel to a Lincolnshire country estate, from the shore of Brighton to the "sticky heat of London." The book has delightful dialogue filled with Hare's playful wit and the plot is informed by his profound knowledge of British law.

Hi! I love Vintage Mysteries and all things British! Suicide Expected sounds interesting. I have Hare's An English Murder on my 'To Be Read' pile. I think I'll get to it soon.

Thank you for bringing this to my attention! The series sounds like one I will love, and I'll try and get the first book. Great review.