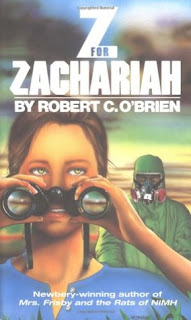 For the record....there aren't a lot of books out there that begin with "Z" that fall into my preferred reading categories and are readily available through the library.  Zombies...oh, man, I could have brought home a boat-load of books on zombies (Zombies, Zombies, Zombies!; Zombies Versus Unicorns; Zombies Versus Nazis; Zombies Don't Cry...you get the idea). Classic-style and/or academic-minded mystery authors, y'all need to step it up a bit.  Just sayin'. It would help out those of us who do alphabetical reading challenges immensely.  Thanks.

That said, after scanning through the online catalog at the local library, I found Z for Zachariah by Robert C. O'Brien (winner of the Newberry award for Mrs. Frisby & the Rats of NIMH).  Young Adult fiction is on my "not-so-much" list of things to read, but this post-apocalyptic, dystopian story really sounded like a winner.  And so it proved.

Written in 1974 (Small soapbox moment here--I wish all the reviewers on Goodreads, and elsewhere, would pay attention to that little detail.  It makes a LOT of difference to one's perspective if one considers the time and context in which the book one reads has been written.), O'Brien tells us about the aftermath of nuclear war from the perspective of Ann Burden, a 16 year old girl who has survived in a valley protected by hills.  Burden and her family lived in a valley that always seemed to have "its own weather."  Fortunately, this seems to have been true, because its protected nature manages to keep out the air currents which would bring the deadly radiation and fallout into the area.  Initially, Ann's family and neighbors are also among the survivors--but they leave the valley one day to investigate the surrounding area and to search for other survivors and never return.

Ann soon comes to believe that she is the only survivor in the world and begins to plan accordingly.  Her life in the valley had been a very simple one and she was taught to shoot, fish, and farm.  She settles down to the business of survival and resigns herself to a very lonely existence.  Until the day she spots a column of smoke in the distance...a column that nightly moves closer to her valley.  She wavers between excitement in knowing that she will no longer be alone and fear of the unknown.  What will this person (persons) be like? Will they be friend or foe?  She learns that being alone may not be the worst that can happen.

This is a very thoughtful book.  It examines ideas of control and humanity.  The questions of fear and trust and what makes for a worthwhile existences when everyone and everything you've known is gone.  Using just two characters, O'Brien gives us a very vivid picture of two possible reactions to the horrifying reality that all (or nearly all) of humanity is gone.  What becomes important?  And who has the right to decide?  If you're looking for fast-paced, action-packed adventure, then this may not be the book for you.  There is conflict and danger, but it is played out as a long-thought-out chess match.  Well done for three and a half stars.

I read this book in 7th grade (10 or so years ago) and I'm not sure I fully appreciated it. I mostly remember chatting with my friends and making fun of it. I wonder what it would be like now after reading a lot more YA lit and post-apocalyptic stories.