DeKok & Murder on the Menu: Review 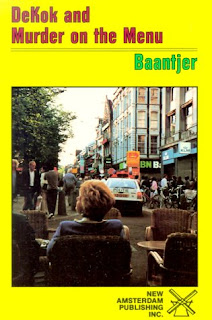 According to Goodreads, DeKok & Murder on the Menu is the 33rd installment in the series by Dutch author A. C. Baantjer.  By my count, it's number 31--but no matter.  At 30-something, DeKok is a well-established character and it is obvious that Baantjer is quite comfortable with his inspector.  He has given us an older detective (older by the 1990s when this was published)--who is bemused by modern technology and a little put off by the fast-pace of modern life.  He is a slow-moving, slow-talking man who may also seem to be slow in his thinking...and yet he always gets to the correct solution in the end.

This outing begins with DeKok in his office questioning a young man who will set an intricate investigation in motion.  The young man works in his father's book shop where they have just taken on the library of Hendrik Donkersloot.  The books themselves aren't extraordinarily valuable, but the boy has found something extraordinary tucked in the pages of an old history book.  It is an old menu from Hotel-Restaurant De Poort van Eden in Amsterdam and written on the back is Donkersloot's confession to murder.  The confession is a highly detailed account of a murder that has remained unsolved for over a year--and which has been written off as drug- or gang-related.  Donkersloot has since died of a heart attack and is unavailable for questioning.

DeKok and his asssistant Vledder follow a trail of clues that lead them from Amsterdam to Rotterdam to Maastricht and from the hotel to the deserted docks along the western harbor.  There are drugs and blackmail and beautiful women mixed up in the case and it's hard for DeKok to reconcile those items with the older Donkersloot and his seemingly innocent widow.  Soon more victims are killed in a similar manner and another confession is discovered.  But how could Donksloot confess to a murder that hadn't yet been committed?

I mentioned the interview with the young man at the beginning of this novel.  I absolutely love it and must give you the very first bit in its full glory:

Inspector DeKok, assigned to the ancient police station in the Warmoesstraat, Amersterdam, leaned comfortably back in his chair and look, with a genial smile on his lips, at the young man who had placed himself in the chair next to his desk. Briefly, he scratched his nose and then stretched an index finger towards his visitor.

DeKok moved his lower lip forward: "A nice name...Jan Schouten. Historical name. There was a famous admiral by that name. And how old are you?"

"Seventeen. I am from Rotterdam. My father owns a large book store there."
"And you want to become a police detective?"

The young man nodded emphatically. "I always read the books Baantjer writes about you. I think they are great. Real thrillers. I would love to get involved in a murder with you and Vledder...totally...from beginning to end. I think that would be awesome.

DeKok grinned. "I am sorry but that's impossible. Anyway...if I were you I wouldn't be so quick to believe everything that Baantjer writes about me. I know him, you know. I like him. We visit from time to time and I tell him about the sort of things that happen to a police-detective in Amsterdam. Baantjer, however, has the tendency to present the facts in a much more complicated and romantic way than they really are. He embellishes a lot. Writers call that poetic license, but in my opinion it is just cheating."

Very nice tongue-in-cheek, self-reference there, Baantjer.  And reminiscent of Holmes' complaints about Watson's publication of the great detective's exploits.

Baantjer does a nice job of twisting the plot several times in the final chapters and kept me guessing all the way through.  I enjoyed my visit with DeKok and am getting fond of the "grey detective"--but I have to say that Baantjer lost a bit of his style in this one.  I read DeKok and Murder on Blood Mountain last year and mentioned in my review how much I liked his descriptive powers.  Perhaps it was the difference in subject matter and less countryside visits to describe--but I was a bit disappointed.

Overall, a good police procedural--well-plotted and interesting.  Good characterization.  All for three and a half stars on the rating scale.