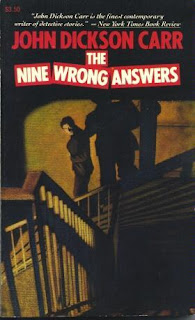 I'm going to blame the heat.  I'm feeling quite lethargic and am having to force myself to read what I know are quite fantastic books (after all, most of them have spent years on my TBR pile--I must have put them there for very good reasons at some point, right?).  And right now I am feeling very grumpy and disgruntled and haven't much enjoyed my latest excursion into the very tricky world of John Dickson Carr.

Generally speaking, I adore Carr and his alter ego Carter Dickson and devour his books like they might disappear out of my hands before I finish.  I like his impossible crimes and his effortless way of playing fair with the reader and still making you come up with the wrong answer.  And I have a very clear memory of being astounded and delighted by The Nine Wrong Answers when I discovered it at the tiny little public library in Spencer, IN twenty-some years ago. [That place was a gold mine of vintage mysteries...but I digress.]  I hunted high and low in used bookstores between then and 2009 before I found a copy of my own.  I put it on the TBR pile for a reread at some suitable moment and, when I decided to do a Vintage Challenge Theme called Murder by the Numbers, decided that this year was the moment.  Perhaps July in the middle of a heat wave wasn't quite the moment.

So, here's the scoop: Bill Dawson goes for a visit to a lawyer who has advertised for him.  It seems his grandma has passed away and left him a hundred pounds.  This is good news for Bill who had left England after a failed romance and managed to not do so very well in the States.  While he waits to see the lawyer, he overhears part of Larry Hurst's story, another man due for an inheritance--if he can carry out the undesirable instructions that will make him eligible.  Hurst, who is also in the States, is being given $10,000 and the requirement that he must return to England and visit his uncle every week for a period of six months in order to be named as his uncle's heir.  Hurst does not want to go.  He claims that his uncle terrorized him as a child and there is no way he can face the man now.

It is discovered that Dawson is in the outer room and has heard most of the conversation.  He has a preliminary discussion with Amberley (the lawyer) and is told to return the next day.   When he leaves, Hurst comes rushing after him and offers him the $10,000 if Dawson will impersonate him and take his place in visiting the dreaded uncle.  After a bit of wavering and interference from Hurst's fiancee, Joy Tenant (who is definitely against the idea), the deal is struck and identification is exchanged.  The three of them go out to a bar to discuss details, but before the night is over Hurst is struck down--apparently poisoned.  Joy disappears and Dawson flees the scene as well.  He is worried about the situation until a newspaper clipping shoved under the hotel door reveals that someone must have removed Dawson's passport, etc. from Hurst's pockets.  The victim in the paper is referred to as an "unknown." So it appears safe for Dawson to go ahead with the impersonation--which he feels honor-bound to do, having promised Hurst in those final moments in the bar that he would "settle with him, Larry.  So help me, I'll settle with him."

So, Dawson takes off for England to do just that. Along the way he encounters romance and adventure and, of course, the evil tricks of the so-called uncle (what uncle would treat a nephew like that) and his man-servant Hatto.  And, of course there are the nine answers.  These are represented in the footnotes which Carr provides at various points throughout the novel.  Ostensibly to clear up any misconceptions the reader has and to "help" the reader to the correct solution.  But readers should be very careful about how they interpret the "help" they're given.

I am quite sure that Carr really has played fair with us--and that is certainly the impression I came away with twenty years ago.  However, I can only go by my reading of the novel this time--and this time I feel thoroughly bamboozled.  I even had to go back and double-check a few of the footnotes just to make sure I hadn't been.  I hadn't.  But that's the way I feel and it has colored my reading of the novel.  I am also thoroughly unimpressed with Dawson and his lady-love--she who was part of the broken romance of before and who has popped up again in his life (shall I go on about the coincidences that I noticed big as life this time? Okay, I won't--'cause like I said I think I'm mostly just too hot to read and concentrate properly....).  I have no idea why these two people want to stay together....all they do is argue.  And keep going on about how they won't be jealous this time.

Not my best reading of one of the classic mystery field's finest--Carr deserves better.  That's why I'm giving him him a straight three stars for this outing and allowing the four star rating from my previous reading to stand on Goodreads.  I do suggest you read this one--just wait for cool weather and a clear head to do so.

Labels: 150 Plus, Antonym Challenge, Off the Shelf, Vintage Mystery Challenge