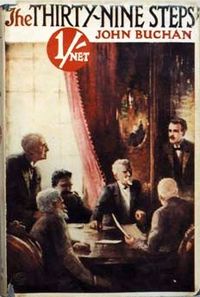 The 39 Steps by John Buchan is one of the fastest-moving, quickest reads I've had in a long time.  It starts out with a bored man and whizzes that man and the reader along through one adventure after another until we reach the grand finale.  Is it probable?  Is it really likely that so many people would take our hero, Richard Hannay, on faith and trust him implicitly on the spot?  Do we think the "permanent secretary to the Foreign Office" and a lead Scotland Yard man would really let an adventurer and an amateur suddenly direct operations at the denouement?  Probably not in the real world.  But Buchan writes such a good yarn that we're willing to suspend our disbelief and go along with it all.

Hannay has returned to England from the colonies with memories of adventures and enough gold to line his bank account and keep him for a good while.  It isn't long before he finds the home country to be a bit tame for his taste.  He decides to give London one more day and if nothing in particular happens, then he'll be off again.  Well, you know what they say: Be careful what you wish for...

Hannay's upstairs neighbor approaches him that night with a story so bizarre, Hannay immediately believes it.  Scudder has discovered a plot that will rock the European world--involving treacherous Germans and assassination plots and he's quite sure that the baddies are on to him.... So he's rustled up a dead body and left it in his place (being sure to make it look like a shooting [disfiguring] suicide) and now he wants Hannay to help hide him for three weeks or so.  Just until the big spy show starts.  He's decided to trust Hannay becasue "I've been watching you and I reckon you're a cool customer.  I reckon, too, that you're an honest man, and not afraid of playing a bold hand."  Scudder won't be the last one to look Hannay over and decide he's an honest chap.

Hannay agrees and Scudder assumes the persona of a British officer in need of a rest.  Our hero's good will is rewarded by coming home one evening to find Scudder dead--"skewered to the floor."  The place has been ransacked and it's obvious that someone was looking for the little black notebook where Scudder kept all his secrets.  Hannay figures that A.  The baddies will assume that Scudder told him all and B. The police will assume that he killed his guest. So, our hero decides to get while the getting is good--conveniently finding the black notebook while he's gathering up supplies to take with him.

Beginning with an impersonation of the milkman, Hannay makes his way from London to the Scottish countryside and back to London again--impersonating all sorts of folks along the way (a born actor as well as adventurer) and somehow always coming across folks who are near enough his size to borrow clothes left and right.  He also manages to decipher Scudder's notebook--which is in code, of course--and further decipher what is meant by the "thirty-nine steps" as well as see through the disguises of the opposition.  All while the Foreign Office johnnies sit back and admire.  [I did mention that this was improbable....]  They let him direct operations to lay a trap for the bad guys and Hannay is right in the thick of things as our story wraps up.

As improbable as the story is, it's a pretty darn good tale.  Lots of action--from car and airplane chases, to impersonations, to a capture and an escape. Hannay trundling across country by train and car and bicycle...and even on hands and knees.  Hiding in thorn thickets and dovecotes.  Blowing up store rooms.  And it's all good clean fun in a good old-fashioned thriller.  Three and a half stars--almost four. 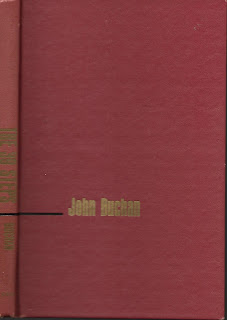 Then I got a corpse--you can always get a body in London if you know where to go for it. [Scudder] (p. 8)

I am an ordinary sort of fellow, not braver than other people, but I hate to see a good man downed, and that long knife would not be the end of Scudder if I could play the game in his place. (p. 16)

...I started my new life in an atmosphere of protest against authority.  I reminded myself that a week ago I had been finding the world dull. (p. 21)

I remembered an old scout in Rhodesia, who had done many things in his day, telling me that the secret of playing a part was to think yourself into it. You could never keep it up, he said, unless you could manage to convince yourself that you were it. (p. 54)

A fool tries to look different; a clever man looks the same and is different. (p. 111)

My copy = no dust jacket

Labels: 150 Plus, 52 Books in 52 Weeks, Mount TBR, Off the Shelf, Vintage Mystery Challenge

That sounds very interesting. I really need to read more of the classic mystery fiction. This book and The Maltese Falcon have been on my list for a while.

Peter: Both this and Falcon are books that would normally be outside my comfort zone (spy thriller and hardboiled), but Buchan and Hammett really make them work for me.

I really enjoyed this one, too! I read it during finals one year and it was the only book that could hold my attention.