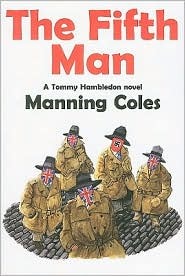 The Fifth Man is my first taste of the work of Manning Coles--and I can assure you, it won't be my last.  This is an absolutely delightful Nazi-filled, spy-thriller first published in 1946 by the neighborly writing duo of Adelaide Frances Oke Manning and Cyril Henry Coles.  The duo wrote many of these spy-thrillers using the pseudonym composed of their last names.  Twenty-six of these feature Tommy (Thomas Elphinstone) Hambledon, a British boarding school teacher who winds up working for the Foreign Office.

In this outing, five British prisoners of war are given the chance to head home--provided they agree to be trained as spies and pledge their service to the Nazi cause.  They all do, but have every intention of hitting British soil and forgetting about their pledge--despite dire warnings of what their fate will be if they double-cross Germany.  One is killed after turning himself in to the British authorities, three more manage to turn themselves in more successfully, and one man remains at large.  Then a man claiming to be Major Alwyn Brampton turns up in the offices of British Intelligence and offers his services as a double-agent.  Brampton is really escaped prisoner Anthony Coleman, but after hearing his story about near-fatal escapes of every sort, multiple assumed identities, and his version of a diabolical Nazi spy ring at work in England, Hambledon is ready to put him to work.  Coleman's extraordinary luck holds through various escapades within the Nazi group until the grand finale when it looks like the double-agent's number may be up.

This book is great fun.  Lots of British wit and understated humor.  I haven't had such a good time with a spy thriller in a long time.  I love the breezy style and following the adventures of Coleman as he dons his various personas.  I'm sure there's way more happy coincidences than one could possibly expect in real life--but that's why this is fiction.  And really good fiction at that.  Four stars for a rollicking good read that I managed to read in one great gulp Sunday afternoon through night.

You are quite mad, but such madness sometimes succeeds when caution fails. (p. 63)

Labels: 150 Plus, Mount TBR, Off the Shelf, Vintage Mystery Challenge

Congrats... You did good last week. I've posted my wrap-up today also. It was a fun and fulfilling week, getting to read the books I've been putting off for so long. I still have four more to go in the series.

Oooooh, Bev, this books sounds as if it's right up my alley. Now to see if I can find it. Wow. I've never read any Manning Coles, but this title moves to the top of TBR Vintage List.

Yes, Yvette, I think you'd really enjoy this one. Rue Morgue has this out in a reprint edition....