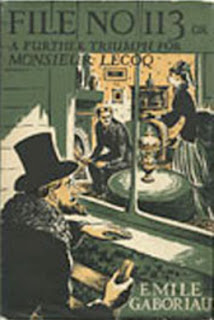 If you stick with the detective, Lecoq, and the main action of this mystery, then File No. 113 by Émile Gaboriau beats The Mystery of the Yellow Room by Gaston Leroux hands down in the category of French detective novels.  Not nearly as well-known as the ground-breaking locked room mystery of Leroux, File No. 113 features a likeable detective, Monsieur Lecoq, who is as adept at the art of disguise as Holmes and more connected with human emotion than his British counterpart. (And I say that as a fan of Holmes, mind you.)

The story seems to be a simple puzzle.  The banking-house of Andre Fauvel has been robbed of 350,000 francs.  Only two men had the key and the secret word that would open the safe where it was kept.  One is Andre Fauvel and the other is his trusted head cashier Prosper Bertomy.  Both protest their innocence and, naturally, the police would never dream of suspecting the respectable Monsieur Fauvel, so the culprit must be the cashier.  Fortunately for Prosper, the great detective Monsieur Lecoq believes him to be innocent and is ready to go to great lengths to prove his theory.  Lecoq dons disguises and marshals all the officers he can to discover how the money could have disappeared if neither the banker nor the cashier is guilty.
In the end, he traces the plot to the past--a story of young lovers, separated by fate, whose actions will have repercussions in the present.  And he discovers the guilt of two evil, grasping men who use their knowledge of those actions to try and ruin Prosper and his young love, Madeleine.

As I mention at the beginning of this review, the present story of the bank robbery and the actual descriptions of the Lecoq's detective work are terrific.  I thoroughly enjoyed Gaboriau's narrative in those sections and my rating for this story rests completely on those portions.  Where it bogs down is in the middle section where Gaboriau describes the past love affair and how it has built up to the present situation.  Quite simply, that goes on WAY too long.  The length completely distracts from the events we're supposed to be concentrating on--the robbery and who is framing Prosper, even though it explains the whole set up.  It goes on for so long that I began to feel like I had wandered into a completely different story--one of star-crossed lovers and unhappy endings.  I would have upped my rating if Gaboriau had found a more succinct way to relay that information.  As it is--three and 3/4 stars for a very good mystery with romance interruptions.

Quotes:
Alas! we must suffer ourselves before we can feel for others. [Nina Gipsy] (p. 21)

I have watched him as only a woman can watch a man upon whom her fate depends, but it has always been in vain. [Nina Gipsy] (p. 21)

There are some people who must be saved without warning, and against their will. [Nina Gipsy] (p. 22)

A father is the one friend upon whom we can always rely. In the hour of need, when all else fails, we remember him upon whose knees we sat when children, and who soothed our sorrows; and even though he may be unable to assist us, his mere presence serves to comfort and strengthen us. (p. 33)

As to acknowledging that he was about to obtain a triumph with the ideas of another man, he never thought of such a thing. It is generally in perfect good faith that the jackdaw struts about in the peacock's feathers. (p. 55)

Excessive suffering brings with it a kind of dull insensibility and stupor.... (p. 60)

Like those imperceptible insects which, having once penetrated the root of a tree devour it in a single night, suspicion, when it invades our minds, soon develops itself and destroys our firmest beliefs. (p. 75)

Vengeance is a delicious fruit, which must be allowed to ripen in order that it may be fully enjoyed. [M. Verduret {Lecoq}] (p. 85)

You say she loves him? No one but a coward would be defrauded of the woman he loved and who loved him. Ah, if I had once felt Madeleine's hand tremble in mine, if her rosy lips had pressed a kiss upon my brow, the whole world could not take her from me. [Louis, the Marquis de Clameran] (p. 189)

It is at the family fireside, often under the shelter of the law itself, that the real tragedies of life are acted; in these days traitors wear gloves, scoundrels cloak themselves in public esteem, and their victims die broken-hearted, but smiling to the last.  What I have just related to you is almost an every-day occurrence; and yet you profess astonishment. [M. Verduret {Lecoq}] (p. 214)

...a statement from you is more convincing than all the proofs in the world. [Joseph] (p. 223)

He was as yet not sufficiently experienced in ruffianism to know that one villain always sacrifices another to advance his own project; he was credulous enough to believe in the old adage of "honor amongst thieves." (p. 236)

I love the teasers!! Thanks for another great review!

I just read THE MYSTERY OF ORCIVAL and your complaint about the love story bogging down the story seems to be a Gaboriau stylistic fault to a modern reader. These books were originaliy serialized and were published in multiple volumes back in the 19th century. ...ORCIVAL has a great beginning detective story with a lively Lecoq showing off his astute skills of observation and sharing detection with a wily judge. Then we are "treated" to the story of the count and his wife (she is a murder victim, he has disappeared) in which we learn that they were duplicitous and treacherous people. It seems to go on forever before the story returns to Lecoq and the judge and the solution to the crimes.

One of these days I'll get around to writing a review of it. But I'm ridiculously behind. Summer is here with all its tempetations. We're outdoors as often as possible, exploring on our bikes, hiking in the state and national parks, and as far away from computers as we can get.

@John: I suppose that one (as an English majory-sort) ought to be thrilled to see a mystery story that reminds one of the typical 19th-century narrative....I'm thinking George Eliot and the need to go into such long, drawn-out, detailed lengths about EV-ER-Y-THING...but I like my detailed 19th century literary fiction separate from my mysteries. And in FILE, it seems like Gaboriau has taken two very different narrative forms and shoved them together (or rather--bookended the romantic 19th C literary fiction with the action/detective story).

I really liked The Mystery of the Yellow Room, so I will have to give this one a try! I've been wanting to read Gaboriau for a while.