Every week Larissa's Bookish Life hosts the Top 5 Sundays meme. Here's what you need to do:

1 - Write a post listing your TOP 5 choices within the theme she chose (or was chosen on a poll) for the week.

2 - Mention Larissa's blog on the post and link back to it.
3 - Feel free to use the Feature's image
4 - After you've finished your post, add you link (of the post, not your blog's main page) to the Mr.Linky at the end of that week's post.

This week’s theme is Top Five Books I Want for Christmas: 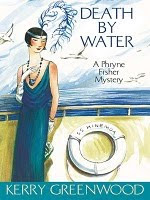 he Phryne Fisher mystery series by Kerry Greenwood. This is an absolutely marvelous series set in 1920s Australia. And I think of Phryne Fisher as the the grownup's Nancy Drew. I've read most of the series, but own none and would love to start collecting them. 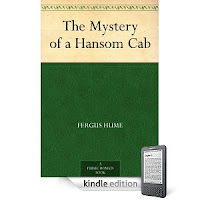 2. I have long wanted to get my hands on Fergus Hume's 1893 mystery story The Mystery of a Hansom Cab. It's been on my list of gotta-haves almost as long as I've liked mysteries (and that's a long time!). Here's the synopsis: On the twenty-seventh day of July at the hour of twenty minutes to two o'clock in the morning a hansom cab drove up to the police station in Grey Street St. Kilda and the driver made the startling statement that his cab contained the body of a man who he had reason to believe had been murdered.

Affair of the 39 Cufflinks by James Anderson: Who ever tires of the zany British country house murder? Lord Burford, for one. When his wife wants to allow nine guests to stay at their country home ("just for the night"). Lord Burford protests that the last time they had a large number of guests stay there had been unfortunate incidents. Lord Burford's misgivings were understandable. After all, the "unfortunate incidents" had been murders. But these people were travelling a long way for the funeral of an elderly relative. There was nowhere else for them to stay in the village, so the Earl really had to offer them accommodations at Alderley, the Burfords' Carolean mansion. Things started to go wrong when one of guests claimed she had knowledge that would ruin the others' reputations. But nobody took that seriously. Until, that is, she was found murdered...

4. The Unfinished Clue by Georgette Heyer...one of the last Heyer mysteries needed to complete my reading of her work.

Synopsis (from Amazon): Sir Arthur Billington-Smith is not a nice person: he is arrogant, opinionated, and abusive. His verbal abuse makes life a constant misery for his hapless wife, Fay. One truly awful weekend when Fay is trying to host a house party, Arthur's son and heir, Geoffrey, brings home Lola de Silva, a Mexican cabaret dancer who is wonderfully obtuse, vastly colorful, and totally unsuitable as a future Lady Billington-Smith. Arthur is absolutely incensed and takes his rage out on everyone. Therefore, when he is found stabbed to death in his study later in the day, all those in the house become suspects.


5. Dorothy L. Sayer's Love All/Busman's Honeymoon by Alzina S Dale (ed) : (synopsis from Amazon review by "A Customer"): fans of Dorothy L Sayers' Vane-Wimsey novels will fine Love All a delightful change of pace. The companion play to the dramatic version of the novel Busman's Honeymoon in this edition, Love All takes a very different approach to male-female relations. While she creates for Harriet Vane and Lord Peter Wimsey a fulfilling personal and professional relationship in Busman's Honeymoon, Sayers suggests in Love All that women can find emotional fulfillment, financial security, and artistic challenges all on their own.

Why I want it: I love the writing of Sayers. So far, I have not found anything by her that I do not like. I've read all the Wimsey novels, including Busman's Honeymoon and I'm very curious to see/read the play version. I understand that there are some differences. I am also intrigued by the description of Love All and would like to check it out.


(No photo available for this one....which may mean that Santa will have a hard time finding it to put under my tree.....)
Posted by Bev Hankins at 3:42 PM

oooh nice choices! I had not heard of them before, but they looks interesting =)