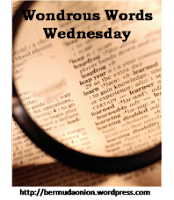 He found the room larger than he expected, but from the look of the furniture he guessed it was the only one in the house.  There was a bed, a deal table, a mangle, a dresser, a sink, and a small range with an open fire.


Mangle: A mangle (as it is called in the United Kingdom) or wringer (as it is called in the United States) is a mechanical laundry aid consisting of two rollers in a sturdy frame, connected by cogs and, in its home version, powered by a hand crank or electrically. While the appliance was originally used to wring water from wet laundry, today mangles are used to press or flatten sheets, tablecloths, kitchen towels, or clothing and other laundry. [from Wikipedia] 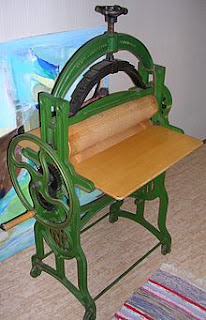 Hi Bev,
Great word and find. Haven't heard of it. I've also finished another book for the Mount TBR challenge. I'm half way through my 12 books. Have a great day!

I knew mangle from my grandmother(!) But, not deal table! This was an interesting post!

I think I saw a mangle on a Martha Stewart program one time - that looks/sounds awfully familiar. Deal table is interesting - I'm not sure I can figure out what sets it apart from other tables besides its size.

That looks so like the mangle my mother had. It was originally my granny's. I remember mum using it, when I was a small child, to wring out the sheets before she got a washing machine that spun the clothes - gosh this makes me feel ancient!

No matter what Wikipedia says, we call it a mangle too! Dee

I haven't come across deal table before either. I've seen mangle before- it's such a great word, and such a great usage.