A Dram of Poison: Review 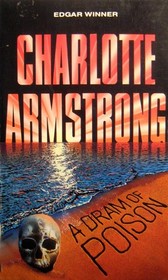 I have a feeling that I missed a memo somewhere.  Or the boat.  Or something.  When I look at Goodreads, the average rating on Charlotte Armstrong's "mystery" novel A Dram of Poison is 4.04/5 stars.  The text reviews that have been given are pretty rave-y.  It was the winner of an Edgar for Best Mystery novel of 1957. It's listed by the Independent Mystery Booksellers Association as one of their favorite mysteries of the 20th century.  And, I'm all, like, um....yeah.  Whatever.  I mean it's a nice little story about this shy, introspective academic-type who has taught poetry (You'd think I'd be hooked right there--I mean, come on, it's got an academic in it for crying out loud.  I love those.) and has been all dependable and reliable and what-not and is now 55 and never been in love and then it happens.  He meets the girl....only he doesn't know it yet.  He just thinks he's being helpful and marrying her to help her out after her crazy father's death--and she needs someone to take care of her and to give her time to regain her strength and actually eat something, for heaven's sake.  So, good, old, dependable Kenneth Gibson is right there to save Rosemary's day--bacon--something.

She blossoms--gets all nice and healthy--and he suddenly notices how lovely she is and....zap! Cupid zings him a good one and he falls in love with his wife. Happy ending, right?  And where's the mystery?  Ain't got one yet.  But that's okay, 'cause we're only half-way done with the book and when you turn two or three pages you'll find the happy couple in hospital.  Car accident....on the way home from celebrating Rosemary's blooming health and the beginning of love's middle-aged dream.  Ah-ha!  You say.  Now we're getting down to cases.  Somebody's trying kill one or both of them off.  There's a secret fortune hidden in Rosemary's crazy father's effects and the secret heir wants it.  OR somebody's lusting after the newly-beautiful and radiant girl and wants to bump off ol' reliable.  Yeah, no.  Just an accident. Really.

Then....Kenneth's sister shows up to take charge while he (who got the brunt of the injuries) recovers.  Sis is an amateur psychologist and starts spouting her theories hither and yon and making both Kenneth and Rosemary doubt themselves and their motives and each other.  Kenneth is filled with sis's doom and gloom psycho-babble and decides that Rosemary never cared and could never possibly care for a middle-aged, stuffy old academic like himself and decides to kill himself --'cause, that's a logical thing to do, you know.  He traipses off to pick up some handy tasteless, do-the-trick-in-a-flash-and-with-no-pain, unnamed poison that his neighbor has conveniently displayed to him way back in chapter one.  He dumps it in a bottle of olive oil (the better to slide it down the hatch), stuffs it in a green bag, climbs on a bus......and somewhere along the way manages to lose the darn stuff.

Ah ha! You say again.  This is one of those inverted mysteries.  You know who the killer is (albeit an unintentional one) and you know how it was done.  All we do now is wait for someone to drop dead from tainted olive oil and watch the fun while the cops try to figure out who had it in for Mr./Ms. X.  Yeah, no.  Nobody dies.  There's no mystery as far as I can see.....except the mystery as to why this was categorized as a mystery.  And maybe, if you want to stretch a point, you could label it as suspense.....because, after all, you--the reader--are on the edge of your seat wondering when the heck the mystery is going to show up.

Charlotte Armstrong is hit or miss for me.  I hated The Chocolate Cobweb; I loved Lay On, MacDuff!  I'm just plain at a loss with A Dram of Poison.  This book has some really delightful, comic dialogue in the second half--which might have done a lot more for me if I hadn't been searching high and low for a mystery hidden somewhere.  I think I might have liked the characters if it had been billed as a straight fiction novel.  I'll never know.  No rating....I have no idea what I want to give it.

Labels: 150 Plus, Criminal Plots, Mount TBR, Off the Shelf

Hmm. I remember being on the edge of my seat wondering if the olive oil bottle would be picked up by some stranger and he/she would end up using it unwittingly and die. I read this long before the days of the tainted Tylenol scandal and I was pretty much riveted and frightened by the idea of accidental poisoning like that. I also remember that the olive oil bottle was empty but the label was still on it or something like that. But I read this when I was in high school and I've obviously forgotten a huge portion of the book. Maybe if I re-read it now I'd be wondering what all the fuss is about.

It may well be that I missed the optimum reading moment for this one. That happens with books sometimes. Or maybe it was my sinus headache (that's been lingering for days now...). Don't know. I just think I would have liked the characters/story a lot better if it had been billed as fiction and not a mystery.

Mis-labeling has ruined many a fine (?) book for me too, Bev. I find that sometimes with the older Edgar winners, books won if they seemd cutting edge because they contained ideas that were new at the time but that we've seen done to death.

But this one sounds more like a twilight zone episode - hence, mis-labeled :-)