The Devil to Pay: Review 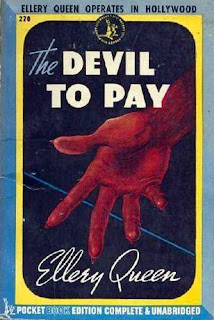 The Devil to Play is the first of the Ellery Queen novels set in Hollywood.  Ellery has been brought west under contract to write a screenplay, but has been left cooling his heels while the producer, Jacques Butcher plays golf by day and the playboy by night.  When Ellery's old school buddy Walter Spaeth calls upon him for help, he's more than happy to leave his lonely office in the depths of the studio to come to the rescue.

Walter's father, Solomon "Solly" Spaeth and Rhys Jardin had partnered up for the Ohippi Hydro-Electric Project--investing their own money and convincing hundreds of others to sink their savings into the project as well.  When the Project goes bust--both from Spaeth's machinations and flooding in the area--the investors are left with nothing.  Well, all of them but Spaeth.  The wily financier has juggled his money about so that he comes out with millions.

When Spaeth is found dead from an apparent sword wound in his home shortly after the news breaks, no one is really surprised and no one is really sad.  In fact, the investors are cheered to think that "that crook" got what was coming to him.  And not even Winni Moon, Spaeth's "protege" sheds many tears--after all, since Spaeth and his son had that very convenient argument over the financier's business practices, a new will has left her with all the loot.  How could a girl be sad about that when there are minks and diamonds and pretty dresses to buy?

Added to the mix, Spaeth and Jardin's daughter Valerie are trying to be in love--but it's difficult with false clues laying about and suspicion focusing alternately on Valerie's father and her lover.  And each man is stubbornly refusing to clear himself...if that's even possible.  The local Inspector is determined to hang the crime on one of these men and it isn't until Queen comes into the case that all the false clues are swept away and the remaining ones are placed in the proper order to lead straight to the villain.

My take: What a relief to get back to a story written by Dannay and Lee.  The entire flow of the story is so much better than my previous read.  It doesn't even matter that the reader can figure out the culprit pretty quickly through simple process of elimination.  The fun of reading the real Queen's turn of phrase, dialogue and descriptions totally make up for it.  And the mystery is fairly clued.  A fun read and decent mystery--rating a nice solid three stars.

"There," said Mr. Queen, waving adieu to the Jardins, "is something for that ossified organ you call your brain to wrestle with." [p. 70]

Faith was all right in its place, which was usually in drippy novels. But a human being couldn't accept certain things on faith. Appearances might be deceiving in some cases, but usually they were photographic images of the truth. [p. 75]

...here, by the sea, in the sun, one could think things out, point by point, and reach serene, reasonable conclusions. [p. 91]

He looked like a perfect idiot. But then Fitz was smart, and appearances weren't always to be trusted. [p. 111]
Posted by Bev Hankins at 11:54 AM

Excellent review Bev - I love Queen's books, even their lighter Hollywood stories from the late thirties which were aimed primarily at magazine sales and so were much less heavy-going that the intensely written and much longer novels of the early 30s.