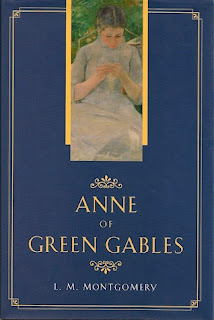 Anne of Green Gables by L. M. Montgomery is, I am quite sure, a much more delightful book than what my review may say.  Not that it wasn't a good story.  I did enjoy it--but I think I would have enjoyed it more some other time.  I've mentioned before here on My Reader's Block that I think that some books are meant for specific times in our lives--not necessarily the same time of life for everyone. I never really got into the "girl" books when I was growing up (Little House on the Prairie, the Anne books, Rebecca of Sunnybrook Farm, Pollyanna, etc....and all those horse-centered books).  There was a point in college when I read Pollyanna and I must have hit it just right because I thoroughly enjoyed it (it helped that I could picture Hayley Mills in the part).

This is a very nice story of Anne (that's Ann with an "e") being adopted by Matthew and Marilla Cuthbert at the turn of last century.  Not that they intended on adopting an orphan girl....no.  They had decided to get a boy who could be trained and be a help to Matthew on the farm.  However, their instructions to a friend who was already on her way to adopt a little girl of her own was garbled by the messenger and it is Anne who Matthew finds waiting at the train station to be picked up.

At first Marilla is determined that Anne must go back to the orphanage, but it doesn't take long for this talkative "queer witch of a girl" to cast her spell upon everyone she meets.  And Anne becomes part of the Cuthbert family.  The book follows Anne from that point all the way through her certification as a teacher herself.  She gets into scrape after scrape--making friends and learning all along the way.

In some ways, Anne reminds me of Pollyanna with her generally sunny disposition and the way she wins people over despite their reluctance or mistrust of her character.  But then she has the stereotypical temperament of the redhead--flying into a rage over Gilbert's calling her "carrots" and then holding a grudge over it for about four years.  She feels all of her emotions (not just sunny, positive ones) very deeply.  I do appreciate Anne's enthusiasm and way of looking at life--but her loooooooooonnnnnnngggggggggg monologues on how much she talks and she knows that she shouldn't and she'll really try and stop really got on my nerves a bit.  Probably wouldn't have bothered me as much if I'd read this sooner.  Personal rating three stars for a nice, solid story.  But I can certainly see why this is a classic and why so many people love it (and the series).

It's delightful when your imaginations come true, isn't it?

True friends are always together in spirit.

For a moment Anne's heart fluttered queerly and for the first time her eyes faltered under Gilbert's gaze and a rosy flush stained the paleness of her face. It was as if a veil that had hung before her inner consciousness had been lifted, giving to her view a revelation of unsuspected feelings and realities. Perhaps, after all, romance did not come into one's life with pomp and blare, like a gay knight riding down; perhaps it crept to one's side like an old friend through quiet ways; perhaps it revealed itself in seeming prose, until some sudden shaft of illumination flung athwart its pages betrayed the rhythm and the music, perhaps. . . perhaps. . .love unfolded naturally out of a beautiful friendship, as a golden-hearted rose slipping from its green sheath.

All life lessons are not learned at college, she thought. Life teaches them everywhere.

Ruby Gillis thinks of nothing but young men, and the older she gets the worse she is. Young men are all very well in their place, but it doesn't do to drag them into everything, does it?

Don't you just love poetry that gives you a crinkly feeling up and down your back?

...because when you are imagining, you might as well imagine something worthwhile. [Anne Shirley] (p.13)

It's been my experience that you can nearly always enjoy things if you make up your mind firmly that you will. [Anne] (p. 30)

I read in a book once that a rose by any other name would smell as sweet, but I've never been able to believe it. I don't believe a rose WOULD be as nice if it was called a thistle or a skunk cabbage. [Anne] (p. 32)

Why must people kneel down to pray? If I really wanted to pray I’ll tell you what I'd do. I'd go out into a great big field all alone or in the deep, deep woods and I'd look up into the sky - up, up, up - into that lovely blue sky that looks as if there was no end to its blueness. And then I'd just feel a prayer. [Anne] (p. 41)

All things great are wound up with all things little. (p. 108)

It's all very well to say resist temptation, but it's ever so much easier to resist it if you can't get the key. [Anne Shirley] (p. 111)

You know there are some things that cannot be expressed in words. [Anne] (p. 113)

“Miss Barry was a kindred spirit after all," Anne confided to Marilla, "You wouldn't think so to look at her, but she is. . . Kindred spirits are not so scarce as I used to think. It's splendid to find out there are so many of them in the world.” (p.125)

...somehow it it's hard to carry out your resolutions when irresistible temptations come. [Anne] (p. 157)

It must be a great deal better to be sensible; but still, I don't believe I'd really like to be a sensible person, because they are so unromantic. [Anne] (p. 160)

...she makes me love her and I like people who make me love them.  It saves me so much trouble in making myself love them. [Mrs. Barry] (p. 222)

I read Anne of Green Gables last year and I too though that perhaps this had come in a little too late for me. I think I would have enjoyed it much more as a kid.

I read it first as a child and then watched the movie and then read it again last week. I loved it but I see what you mean about the long dialogue. I skipped a lot of the long paragraphs. Have you scene the movies?