The Man in the Brown Suit: Review 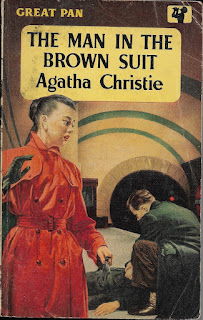 Anne Beddingfeld has always longed for adventures...and romance. Preferably romantic adventures. She has spent her life with her academic father, a man who was an expert on Primitive Man, but no expert on raising daughters or managing finances. When her father passes away, Anne finds herself set to face the world with 87 pounds and change in her pocket. Her father's well-meaning associates and the townspeople who knew them all aim to help in their suggestions that she take on a nice position as a secretary or an assistant librarian or even as wife to the doctor, but Anne is determined to find adventures. And when she watches a scared man back himself off the platform at Hyde Park Underground Station and be pronounced dead by a doctor in a brown suit who promptly disappears while leaving behind a scrap of paper with an odd message scrawled on it, she finds that she's about to get her wish. But you know what they say about being careful what you wish for.....


The Man in the Brown Suit is one of Agatha Christie's early attempts at light-hearted espionage. Yes, there are deaths and mysterious master criminals directing nefarious schemes and hidden diamonds and blackmail, but it's all of the sort that one finds it hard to take seriously. That doesn't make it any less fun or exciting to read, but it doesn't produce the edge-of-your-seat thrills that some espionage stories will.


Anne uses her last 87 pounds to book passage on a ship bound for South Africa. Her investigations into the slip of paper and the man in the brown suit convince her that something important will happen on that ship. She soon has a wounded man bursting into her cabin the middle of the night, a film canister full of diamonds is slipped throught the ventilator of her new-found friend's cabin, and an attempt is made on Anne's life. There are several suspicious characters on board...two secretaries to Sir Eustace Peldar (both acting rather oddly), a parson who claims to have recently been in Africa yet shows no signs of the African sun, a Colonel Race who everybody says is a government man, and even Sir Eustace himself. Anne is determined to suspect everyone until shown differently. She spends the rest of the story working out who she can trust and who the evil mastermind is.


While it was a bit exasperating to watch Anne fall into the classic heroine trap of being tricked into coming to an isolated home alone and then bound and gagged to wait for the "Colonel" to come, it was refreshing to see her use her resourcefulness to escape her captors. It was also nice to see her learn from the experience and not be caught napping again. Anne is a likable main character--smart, brave, and willing to learn from her mistakes. I enjoyed Anne very much. And I enjoyed the story--but, be warned, it's lighter than a lot of Christie's and the emphasis is not so much on the mystery. Three and a half stars out five.
Posted by Bev Hankins at 4:16 PM

Bev, I LOVE this book! I can tell that maybe you're not as enthusiastic about it as I've always been. But it sounds as if you liked it well enough.

Yvette, I do like this one. But I like the Tommy & Tuppence stories much better for this sort of thing. Three and a half stars is pretty good though...almost a four.

This one's still on my "to read" list. It's one of the few that I don't yet own a copy of...I need to get on that :)
I've been having a "Philo Vance" weekend, and I'm determined to finish the three-novel omnibus next weekend--probably not my best choice in the universe, but hey, pleasure reading is *infinitely* important, and how can I write a decent dissertation without a relaxed mind, right?

A Philo Vance weekend is always a good thing. And, yes, a relaxed mind is a must for dissertation writing.

I adore this book, it's one of my favorites of Christie. Anne is such a fun character and I wish she has shown up later.