You Can Die Laughing: Review 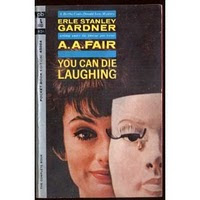 You Can Die Laughing (1957) is a Bertha Cool & Donald Lam mystery written by Erle Stanley Gardner under the name A. A. Fair. I picked this one up on one of my used bookstore hunts simply because it's one of those pocket size editions that I love. I'm not a big fan of the Perry Mason stories--nothing personal, they just don't happen to be my cup of tea--and I never expected to read this one based on what I'd heard about the Cool/Lam series. Then I signed up for the A-Z Reading Challenge and found myself in need of a book whose title began with "Y." It seemed a shame to go hunting for a book at the library when I had a suitable book sitting on the shelf. So, I dove in.


It was pretty much what I expected. American private eye team; a bit of tough talk from the cop who has a love/hate relationship with them; curvy dames. You know the routine. In this particular outing, Cool & Lam are hired by a big, forthright Texan to track down a missing wife. Not his wife. Someone else's. But the lady in question happens to hold rights to a bit of land that this Texan wants. Except now he doesn't...want the land that is. At least, when questioned he denies ever saying that he mentioned land or mineral rights or anything interesting of that nature--all he wants is to find the lady. Just to talk to her, I guess. Lam does a bit of investigating and finds a nosy neighbor who claims that the husband, Drury Wells (if you happened to want to know) has murdered the wife. Nosy neighbor spins a tale that convinces Lam to contact his friend the cop.


But then the "corpse" shows up and is one fine-looking lady. "She had red hair, blue eyes and a figure like one of the babes in the comic strips." Suddenly, the husband is wanting to sue Cool & Lam for defamination of character and the neighbor has had an attack of amnesia. She never said such awful things to Donald Lam. Why would she make up such stories about such nice neighbors? Of course, by this point Lam is smelling something fishy like someone has parked a whole truckload of tuna in the desert sun. What exactly is going on? Has anybody been killed? And the big question, at least for Cool & Lam, will they get paid?


This was a decent private eye story. I guessed part of the solution, but not all. So, Gardner did a fairly good job of keeping me in the dark. The best part for me was the relationship between Bertha Cool and Donald Lam. I'm sure that those who enjoy American private eye novels and who like Perry Mason would rate this much higher than I will. Three stars--decent read, but nothing to knock my socks off.

I had to come back for this review. I like Perry Mason so I might enjoy this one. The title is just so appealing! I'll have to keep an eye out for a copy.

Guess what, Bev? Although I own a small pile of A.A. Fair books - never read one of 'em! I started on Bats Fly at Dusk a long time ago but never finished it. I recently read somewhere that there was supposed to be a TV pilot back in the 70s with Shelley Winters as Bertha Lam, but it never happened. She would've been perfect and I think very funny.

@John: You're right. Shelley Winters would have been perfect.