The Silk Stocking Murders by Anthony Berkeley (1928) is another fine example of the Golden Age amatuer detective. Independent and a writer of best-selling novels as well as a crime-themed article for The Daily Courier, Roger Sheringham is interested in detection and always ready to help the officials out when they seem to be going astray.


Sheringham is first brought into this mystery by a note from a country parson. His daughter Janet had left home to try and ease his burden of feeding five daughters and to try and make her way in the world well enough to send home support for her sisters. After writing faithfully for some time, her letters simply stopped. The vicar doesn't want publicity and doesn't want to involve the police, but, having read Sheringham's articles, thought he might be willing to investigate. Sheringham is touched by the letter and the vicar's faith in him and sets out to find the girl. Unfortunately, he has been set on the trail too late and he soon finds that Janet is dead. She was found hanged by her own silk stocking and the coroner and his jury quickly found for a case of suicide. But then other girls, including a society darling, are found dead in similar circumstance and Sheringham and the police begin to wonder if this is simply a case of copycat suicides or something much more sinister. It takes one final attempt on the sister of the first victim for Sheringham to finally work out who the culprit is. But there is no real evidence and he is forced to perform a reconstruction of the crimes in order to flush the villain out.


Sheringham is, as I said, another example of the Golden Age detective...with a twist. He is by no means infallible...and makes several mistakes along the way to the solution. He is also young and brash and very sure of himself--and the police, primarily in the person of Inspector Moresby, are often on hand to see his brashness land him in one of his many mistakes. It is refreshing to have an amatuer detective who isn't perfect and always right. I was a bit dismayed at how long it took Sheringham to figure out that he had murder on his hands and not suicides. I realize that I, as the reader, had a head-start on him--after all, the book wasn't titled The Silk Stocking Suicides--but still. Would a girl really hang herself with one sock on and one sock off, as it were? I don't think so. 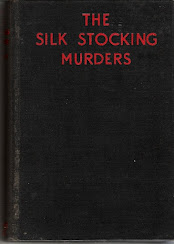 I hadn't read any of Berkeley's mysteries since The Poisoned Chocolate Case (one of his best) and have missed his style and his detective. Even though I was ahead of Sheringham throughout (I fingered the culprit early on, although I could not for the life of me figure out how he managed to be in two places at once), I thoroughly enjoyed this romp through the Golden Age. And I absolutely love Sheringham's parting shot to Inspector Morseby: "Do you know what's the matter with your real detectives at Scotland Yard, Morseby? You don't read enough of those detective stories." Three and a half stars.
My copy = without dust jacket
Posted by Bev Hankins at 1:10 PM

Bev, these are such fun to read. I own the first Nancy Drew and a few hardy boys from my youth. I am sorry to say I have yet to read them. My "vintage" mystery reads include the whole series by Trixie Belden. That was my generation. I always liked the covers and the titles to some of these mysteries. So dramatic.

Roger Sheringham! In some of his books he's such a prick. I love it! Berkeley eventually toned him down and made his more likeable. Wish he hadn't caved in to his publisher's demand. This is one I haven't read yet. I have nearly all the Anthony Berkeley books. Poisoned Chocoates... is a landmark in the genre. I managed to get the solution that Sheringham came up with, but not the real solution that is finally given at the close of the book. The worst one is The Wychford Poisoning Case. It's extremely odd. One quarter of the book is devoted to - are you ready? - spanking scenes. Completely superfluous scenes that have nothing to do with the investigation of the crime. It's supposed to be some kind of spoof of something in a best selling book of the time, but I've never found out which one. Bizarre to say the least.

Spanking scenes?! Oh, wow. Now you've got me curious...just to try and figure out what book it's spoofing!

Could Anthony Berkeley and Dorothy L. Sayers been in a little nudge-nudge-wink-wink? I just finished Have His Carcase by Dorothy Sayers, in which she plugs Sheringham in Chapter 33: “There’s the Roger Sheringham method, for instance. You prove elaborately and detail that A did the murder…”
Next I picked up The Silk Stocking Murders by Anthony Berkeley. First deja vu: Surprise! Here is Roger Sheringham in the flesh! Second deja vu: In Chapter 2: “…ever since thy had parted at Loudmouth after the Vane case (Strong Poison?) Inspector Moresby had rankled in Roger’s mind…”

Rick: I don't think so. They were both members of the Detection Club and the members often referenced each other's work--sometimes blatantly and sometimes more obliquely.