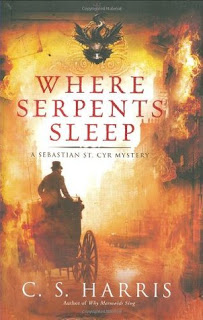 Sebastian St. Cyr, Viscount Devlin is surprised when Hero Jarvis, daughter of a man who would cheerfully have Devlin killed if he thought he could get away with it, comes to him for help. Hero is much like her father--proud, imperious, and certain to get her way, but she differs from him in one way: she is reform-minded and has been spending her time among the prostitutes doing research towards public reform for these women. Her research had taken her to the Magdalen House, a home for fallen women run by Quakers. While there one evening, men come and brutally kill eight of the women. Hero narrowly escapes after one of the women who had gone by the name of Rose dies in her arms.

The house goes up in flames and the powerful Lord Jarvis arranges for Bow Street to be satisfied that the women all died from the fire (not murdered as Hero can bear witness). He doesn't want any scandal connecting his daughter to these women from the streets and he forbids her to go to Bow Street herself. But he didn't tell her she couldn't investigate on her own...or ask for private assistance. And she wants to find out how Rose, a young woman gently born, had wound up in Magdalen House and why she had to die. So, she makes an uneasy partnership with Devlin. On the face of it, the viscount has no reason to aid his adversary's daughter, but his curiosity gets the better of him and he can't resist an opportunity to annoy Jarvis.

Their investigation takes them from the rooms of an upscale brothel to the Mayfair mansion of a well-born family and from East End docks to the steps of the House of Commons. There are secrets in that Mayfair mansion and a plot swirling around the government. But even in what they discover, all is not what it seems and they have to make their way through layers of mystery to get to the real reason for the murders. The killers are ruthless and determined to eliminate anyone who might be able to identify them and reveal their ultimate purpose. There is an attempt on Hero's life--three times--and she and Devlin narrowly escape a water death in the rising tide. Lord Jarvis won't be pleased...especially when he discovers who had marked his daughter for murder. Fortunately for him, his adversary Devlin is very good at keeping his associates out of the grave.

The fourth in the series and Harris keeps the action going. I really enjoy the time period and Devlin is just a very good character. Hero Jarvis is also very interesting and it was great fun to see her take more of a center stage and to give Devlin as good as he gives. She's intelligent and able to keep up with him--and she's a pretty good shot in a pinch. Harris also weaves historical events into the story without either beating the reader over the head with research or mangling events in order to make a story--as she explains in the afterword, a few liberties were taken but nothing that changes history significantly.

Again, there are clues that would allow the reader to identify the perpetrator of the final murder...but I don't know that I find this person as compelling in the role. More background on the incidents leading up to their decision to kill would have been useful--though perhaps that might have provided too much of a neon sign to shout "X is the killer!" But this is a minor quibble and overall Harris has provided another enjoyable historical mystery. ★★★★

First line: The girl stared out the window, one hand sliding up and down her shawl-covered arm in a ceaseless, uneasy motion.

Last line: Tightening his knees, he sent the mare flying forward across the park. Toward his father, and toward a reconciliation too long delayed.