If the Shroud Fits 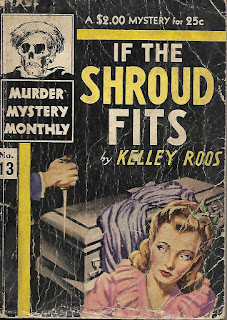 If the Shroud Fits (1941) by Kelley Roos is the story of murder in the world of advertising photography. It opens with Haila Troy, new bride of mere months, waiting for hubby Jeff to come home (hopefully with news of a job). While she's waiting, Julie--a friend from Haila's modeling days--drops by. Julie is clearly in a nervous state and she desperately wants to consult Jeff. Since his success in dealing with the mystery in Made Up to Kill, she's sure that he can handle whatever mysterious thing might be going on. Haila finally convinces her friend that she doesn't know where Jeff is, nor when he'll be home and why not get her mystery off her chest while she's here?

It winds up that Julie had a very odd experience in the dark room of Photo Arts, the photography studio where she works as a designer. Mac and Kirk (co-owners) had a big shoot that day. An advertising photo shoot that could make their reputation. Everything had gone well and Julie had gone into the dark room to retrieve a list of props. She was in a hurry and knew exactly where it was, so didn't bother turning on the light. She suddenly became aware that she wasn't alone in the room...

When you hear a noise that has danger in it, you can sense that danger somehow. (p.10)

The noise startled her, but then she noticed an odd smell--a smell she only identified later as chloroform. That's when she got nervous. Because she was sure that someone had murder on their mind and she didn't know who would be the killer and who would be victim. Obviously not her--because he or she had their chance when she called out "Who's there?" But they didn't take advantage of the moment...they just slipped quietly out while she was having a case of the jim-jams.

As Haila's trying to calm her down, the phone rings and it's the studio--the pictures have been ruined and they're going to have to do the whole thing over. Haila tells Julie that she must go and let Mac & Kirk know what happened and she (Haila) will come as soon as possible with Jeff. Well...Jeff doesn't come and Haila decides she must go without him. As soon as she gets there, Julie tells her it's all okay; she'll explain later; and Haila can just go home. Before Haila can get any sense out of her, she's (Haila) roped into taking the place of a missing model and the shoot once again goes well. That is...until everyone is changing back into their street clothes and Mrs. Isabelle Fleming, the star of the piece, is found stabbed to death before the mirror in her dressing room.

When the police show up, it doesn't take them long to fasten on Mac as first suspect. He's married to the victim's niece and only heir. The niece will now inherit a nice bundle and the photo studio is badly in need of an influx of cash. Various other clues seem to point in his direction as well. But Haila...and Jeff, once he arrives on the scene, are convinced that there's more to this murder (and the one that follows) than meets the eye. And it's up to them keep Mac out of the electric chair.

Okay...I've been mulling over my review (for much longer than intended) and I'm just not sure about what I think of this one. One question I had right off the bat--how did they know to call the Troy's apartment to find Julie at the beginning? I mean, Julie was all worried that somebody at that photo shoot was a killer and she didn't know who. She also didn't tell anybody about her encounter in the dark room, so I can't imagine she announced to everybody: "Hey, I'm gonna go over to the Troy's place for a quick consultation." But that's minor. And really, most of my quibbles with this one are. The humor falls flat--especially the wise-cracking policeman who at times seem to be doing a weak imitation of good cop/bad cop. Haila really doesn't hold up her end of the couple detective business very well. And...that ending. Seriously? Spoiler in apparent empty place: We're really supposed to believe that Haila's imagination made her believe she was being gassed to death? That she was that hysterical? Not a good look for the female detective. Not at all.

On the plus side: I particularly liked the setting. I thought the photo shoot made an interesting backdrop for the murder. It gave us a closed group of suspects, and with characters milling about--getting into and out of outfits for the photo shoot, wandering in and out of the dark room, and, of all things, doing cartwheels--it's no wonder it was difficult to figure out who grabbed the knife and when. And overall we get a good feel for the time period--from the agency itself to the elaborate dining set that gave background for the photo shoot tableau to the streets of New York to the various apartments belonging to the suspects. I also enjoyed the scenes where Jeff was present--a shame he was missing for a good portion of the first half. ★★★ for a middle-of--the--road mystery.

Both Kate at Cross Examining Crime and JJ at The Invisible Event have previously reviewed this. Click the links to check out their thoughts.

First line: It had started raining about six o'clock, a cold blue October rain that slashed horizontally against the windows and swirled over the roof.

Last lines: Your mind! And what does it matter? You're awful cute, Halia. Kiss me.

Deaths = (one stabbed; one strangled)

Yes that is one of mystery fiction's most frustrating endings lol