Foot in the Grave 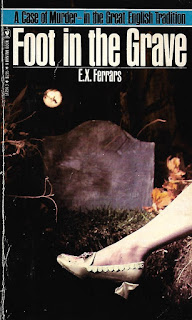 Foot in the Grave (1972) by E. X. Ferrars
Christine Findon likes her quiet little home life with her husband Henry. She's not much of a people person and definitely doesn't like them in large quantities. So, when she finds herself with a houseful of people one weekend, she already feels out of sorts. Like maybe she was suffering from an overdose of the human race. In a very short time period, her house had filled up with one cook/housekeeper that she really didn't need; her rather precocious young nephew and niece; their au pair; the prodigal son of the cook/housekeeper; her brother-in-law; and one of Christine's oldest friends who is visiting in order to give a talk on antique shoes.
Things definitely start out weird when Christine goes upstairs after breakfast and meets a strange man coming downstairs.

As she went, she wondered if she might be going mad. She could usually recognize the people whom she met in her own home, or at least account for their presence there.

Of course, the man winds up being the prodigal son of their prodigal cook/housekeeper. Mrs. Heacham had originally been the cook/housekeeper for Christine's father when he was alive. When the Christine's father died, Mrs. Heacham had gone to Canada for several years and had just recently come back to England. Somehow it was assumed that she would just take up where she left off and work for Christine. Next, Vivienne, Christine's friend, arrives and her wearable shoes disappear. Well...not all of them. Just the left shoe from each pair. Anybody in the house could have taken the shoes, but why would they?
The next morning Christine finds the missing shoes burned and destroyed in the remains of a bonfire (made from leaves the housekeeper's prodigal son Lew had thoughtfully swept up for them). But that isn't the worst thing found destroyed that morning...the body of Mrs. Heacham is found stuffed in a trunk in the storeroom and now they not only have a thief but a murderer amongst them.
The best thing about this one is the characters. Ferrars gives us fully realized, well-drawn characters and fills the house with them (literally). Their interactions with one another make for interesting reading. What keeps this from being a first-rate mystery is the plot itself. I'm just not sold on the motive that results in murder--I might have been if there had been any indications of it. But there weren't. Spoiler in apparent blank space--highlight if curious: At no time are we given any indication that Vivienne has reasons to steal Henry's snuff boxes. No hints that she or her husband have always coveted them or were in need of money. She's supposedly an old friend of Christine's and we've no reason to think she would do anything so despicable. It just pops up at the end. Others on Goodreads give the mystery high marks indeed, so your mileage may vary.  ★★★--just.
Quotes
First line: Christine Findon was going upstairs after breakfast to get sheets from the linen cupboard to make up the bed in the spare room for her friend, Vivien Richmond, who was arriving  that afternoon to spend the weekend with the Findons, when she met a perfectly strange man coming downstairs.
This happened almost every time he and Christine went out. A week or so before the occasion, Henry was capable of believing that he would enjoy it, and when he was actually in the middle of it he enjoyed it as much as anyone, but in the few hours before it a deep gloom settled on him at the prospect of being torn away from his home. (p. 30)
Last line: It took Christine longer than she had expected to begin to get used to that continuing quiet.
*****************
Deaths = one hit with hammer
Posted by Bev Hankins at 1:46 PM