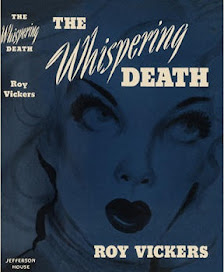 The Whispering Death (1947; 1st US printing*) by Roy Vickers

The Whisperer holds all of London in a grip of terror--holding innocent victims for ransom and killing whenever his demands are not met. Using the fairly new wireless technology, he has devised a diabolical system that prevents his targets from lining up police help in advance. A bag with a wireless set is delivered to the target, who must don the headset and follow the hoarse whispered instructions exactly as they are given. Only one step is revealed at a time, so they never know where they're going or what they must do. So far, Scotland Yard has been powerless to stop the reign of terror--each time the Whisperer escapes their grasp and too many times a lifeless victim has been left behind.

Then the Whisperer sets his sights on Roland Blatch. Roland wouldn't seem to be an ideal target--he's a lowly secretary pulling a mere six hundred pounds a year--just enough that he and his girl Joyce Merrow can now think about getting married. He rather imprudently (as it happens) tells her not to worry about the Whisperer--he'd never go after people like them who couldn't pay up. But Roland has forgotten that his employer, Sir Henry Glazeborough, had given him the keys to a safe where 80,000 pounds of jewelry was stored....

The next thing he knows, he has received a threatening note telling him that Joyce has been kidnapped and also one of those dreadful wireless boxes. When he dons the headphones, he is told in periodic bursts of instructions to go and remove the jewels from his employer's safe, take a taxi to Liverpool station, which train to take, and then upon seeing a black flag signaling along the tracks to toss the bag with jewels out the window. Even having a Scotland Yard man pick up his trail immediately and accompany him on his little journey doesn't prevent the Whisperer from getting what he wants.

Joyce is released and Roland is happy for that--but he knows he can't face his employer. He's now a thief--even though an unwilling one. When a phone call comes telling him that he can throw his lot in with Whisperer, he decides to play a risky game. He'll join up with the Whisperer all right...but only so he can wreak revenge on the man who dared to threaten his girl and who ruined his career. What follows is a high-octane adventure where Roland does his best to outwit the cleverest criminal in London. He'll endure several hair-raising episodes, including two attempts on his own life--but will our hero win the day?

Vickers has put together a fine example of the "innocent man pulled into situations beyond his control." Roland is a brave, intrepid hero...willing to beard the lion in his den. The thrills and the ambiance of 1930s London is perfect and keeps the reader turning the pages. The only (small) downside to this exciting action/adventure mystery is that the identity of the Whisperer is all too obvious. But Roland holds up his end of the show so well that we don't mind too much. ★★★★

First line: Nine-thirty to ten-thirty--the slack hour of a London evening. In the lounge of a well-known hotel-restaurant a few late diners were taking their coffee.

Last line: "Oh, by the way, as a temporary detective for a period of five days, you're entitled to six pounds fourteen shillings and expenses."

Sounds really good Bev! I’ve been away from the blogging world for a while and in a crazy world that seems to be falling apart and constantly changing it’s so nice to come back to your faithful blog and disappear in a good mystery!

Hi, Peggy! Glad you dropped by and hope that you are able to get back to enjoying blogging again.

This one was a lot of fun. So far the only way I've been able to find Vickers is in the 3-in-1 Detective club editions.