A Halo for Nobody 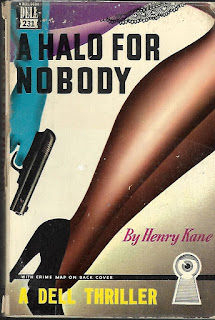 A Halo for Nobody (1947) by Henry Kane is the first of his Peter Chambers series and it features quite a murder fest. Peter Chambers is the tough guy, rougher half of Scoffol and Chambers, Investigators. One evening he is an eyewitness to the murder of Rochelle Curtis, wife of the wealthy Blair Curtis who owns half of an elite jewelry business. But when Blair Curtis approaches him to investigate it isn't his wife's murder that he's most interested in--it's the fact that he thinks he's being blackmailed. Getting to the bottom of the blackmailing business, will lead him to find connections between Rochelle's murder, the death of Joe Pineapple (one of the men involved in Rochelle's shoot and run death), as well as half a dozen more deaths including that of a reclusive, wealthy bookmaker. Curtis doesn't think it really has anything to do with him or his circle...Chambers may just prove him wrong.

Kane's story takes us on fast-paced journey through seedy dives and upscale clubs with equal abandon. Chambers may walk the mean streets but he glides easily between the two worlds and just as easily sidesteps threats from both the upper class and the denizens of New York's underworld. Along the way he manages to collect quite an arsenal of hand weapons from those looking to ensure that this case is his last...he'll prove them wrong as well.

Hardboiled crime fiction isn't my usual fare and for those who like this sort of thing, I'm not sure that it's the most shining example. But I liked it. There was something about Chambers and his methods that just clicked with me. It's amazing that he didn't get knocked off several times in this book (but then Kane wouldn't let that happen to his hero, would he?). I did enjoy how one of the suspects underestimated him and misjudged exactly what Chambers would or wouldn't do. Not that the estimation was all that misguided given past performance, but Chambers has a few tricks up his sleeve that he only uses when necessary.

Certainly not a fair play mystery, but I don't expect that from this type of crime fiction. A fun, fast-paced read that made for an enjoyable afternoon. ★★★ 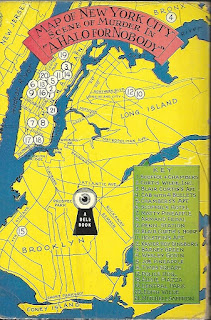 First line: I saw the thing happen, and in a cockeyed, roundabout way I was mixed up in it, so the policeman had every right in the world to ask questions.

I fully realize that the man was trying to do his job of work and I was doing my darnedest to be nice and proper and placid, but his method  and his manner were about as efficacious as sandpaper on the rough edge of a tombstone, and it was becoming irritating. (p. 5)

I always wonder about these crime scene/environs maps. Did the published get the maps/crime scene sketches from the author, or did someone have the task of reading the book and figuring it all out after-the-fact?

Rick: I hadn't thought about that. It looks (from this article: https://crimereads.com/dell-mapbacks-a-history/) like the illustrator did the maps themselves and then Dell editors double-checked the accuracy.