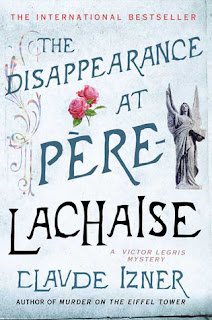 This is the second in the French historical mystery series featuring bookseller Victor Legris as an amateur detective. He is pulled into another investigation when Denise, the maid of his ex-lover, comes to him, frightened out of her wits and begging for help. Her mistress, Odette de Valois has disappeared from the  Père-Lachaise cemetery. Denise had accompanied Madame de Valois to the tomb of her husband Armand de Valois. The widow had been instructed via a spiritualist's communication to bring certain items to tomb in order to allow her husband's spirit to rest. She instructs her maid to wait for her outside and Denise walks around for a bit. When she returns, there is no sign of her mistress except for a scarf. The gatekeeper insists that the two women must have missed each other and tells Denise to go on home where she's sure to find Madame.

But she doesn't. All alone in the house, she barricades herself in her room--which proves to be a wise move when someone comes into the house and tries to get in...unsuccessfully. As early as possible, she heads for the only person she knows in Paris, Odette's former lover Victor Legris. He doesn't think things are as serious as the maid would have him believe, but he does agree to investigate because he can see that she is truly terrified. When Denise winds up dead, he is sorry he didn't take her more seriously and he and his shop assistant begin investigating in earnest. They will find a trail of murder that leads all the back to the isthmus of Panama where a new canal is being dug.

Okay...can I just say that I hope Victor gets more interesting as an amateur detective in the next book because I have four more of this series sitting on my TBR shelves and up till now he's just not doing it for me. A bookseller amateur detective in turn-of-the-century (19th to 20th, that is) Paris sounded like a good idea at the time. But if you're going to write a whole series about a guy as an amateur detective, it would be nice if the reader really wanted to read about that guy doing the investigating. As I mentioned in my review of the first book, I'm much more impressed with Joseph, the assistant. He's much more enthusiastic about mysteries and, again, if Victor would share all the information with him, I'm quite sure he could run rings around Victor as a sleuth. And Victor is quite frankly too hung up on his personal relationships. Last book's primary emotions was suspicion--suspecting both his latest love, beautiful artist Tasha, and his mentor in turn as the murderer. This time around he's focused on jealousy. He's jealous of the other artists and, really, anyone who gets a minute of Tasha's time.

As with the last book, the mystery itself is an interesting one and the characters involved are well-drawn. Père Moscou is a particularly interesting man with his intermittent bouts of believing he's still in Napoleon's army. He also helps keep the investigators on their toes (without really meaning to). The clues are a little less evident in retrospect, but there are still a number of good pointers for those who are alert. ★★★ all for plot--none for Victor.

First line: They had finally reached Las Juntas after a difficult descent through forests dripping with humidity.

Last line: You saved Victor's life and for that you deserve a kiss and my eternal gratitude.

Deaths = 6 (three hit on head; one fell from height; one stabbed; one natural causes)