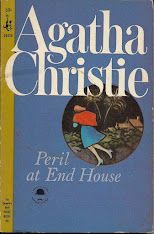 Hercule Poirot and Captain Hastings are having a holiday on the Cornish coast. Poirot is, he insists, retired. He has, in fact, turned down an appeal from the Home Secretary which has just arrived by post. But then Miss Nick Buckley comes into the garden below where he and Hastings have been sitting on a terrace. They invite her to join them and in the course of conversation, she reveals something alarming:

I've had three escapes from sudden death in as many days so I must lead a charmed life.

They aren't quite sure what to make of her story of a heavy portrait crashing from the wall above her bed, of a boulder plunging into the sea where she was swimming, and the curious failure of car brakes. Then there is a buzzing as if from a wasp and when her friends call her to join them for drinks and she leaves her hat behind Poirot finds evidence of a fourth attempt. A bullet hole in the hat and a bullet in the garden.

Poirot quickly leaves retirement behind and determines to protect Nick from whomever may be plotting against her. He meets her friends and those in her household at End House (her family home) and makes a list of suspects and their possible motives. But although he is certain that he has given Nick all the protection she needs, death still visits the lonely house on the cliff. But it isn't Nick who dies--her cousin Maggie is shot while wearing Nick's red shawl--and Poirot is even more determined to catch the murderer who would dare to kill right under the detective's nose.

Not my all-time favorite Christie, but still very good. I enjoy the different ways that Christie has used the mistaken identity theme over the course of her books. I had the right culprit early on, but I couldn't figure out the motive. Then I got distracted by Christie's red herrings (as she intended) and decided I must have been wrong. So...once again, she fools me. This is why she gets ★★★ and a half. What keeps this from a higher rating is the characters. There just weren't any vivid characters in this particular outing--Poirot and Hastings didn't even seem to be at the top of their game (from my point of view). Generally speaking in Dame Agatha's work there is at least one memorable character (other than our detective) and sometimes there's a whole train full of interesting people. But even Nick, who is at the center of the action, doesn't leave a great impression. I read nearly all of Christie's mysteries 30-40 years ago and despite my memory being more and more sieve-like (I rarely remember whodunit except for the biggies--like that train mystery), I can usually name a character from the book. I definitely would not have come up with any of the characters' names for Peril...and I'd bet good money that it won't be long before they fall out of my head again.

First line: No seaside town in the south of England is, I think, as attractive as St. Loo

Last line: "Now I know everything," he said happily.

Thanks for the review! I had to pull my copy off the shelf and check it. Last read March 2011. I have always figured it takes me ten years to erase a book from my mind, so this one is coming right up on the re-read list. Quite a few unread Christies, too. Guess I have will have to plug her into the Six Shooter for 2021.

Your comment "I've had three escapes from sudden death " brought to mind a long-ago conversation with a German-American co-worker. As is usual with German-Americans, he uses the German verb-at-the-end sentence structure, and told me about his previous job on the railroad: "It very dangerous was. I was almost two times killed." I tried to explain he couldn't possibly be two times killed, for if the first time was successful, he wouldn't be alive for the second killing. Oh well!

Christie is good comfort reading for me. She was so very good at plotting and twisting old plots into new shapes. I'm glad my memory isn't as good as it used to be--it means I can reread most of her work and not remember whodunit.