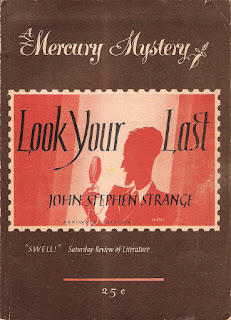 I've seen so many investigations into this, that, and the other. Each time one hopes that the truth will be uncovered. And sometimes that happens. But even when it does, what good is it? The most curious aspect of truth seems to be that nobody will believe it. We can swallow any quantity of falsehoods and fancies, but not the truth. (p. 89)
Look Your Last (1943) by John Stephen Strange (Dorothy Stockbridge Tillett)

Look Your Last is a spy thriller murder mystery set in 1941 before the United States had entered the war and before many people believed Hitler and his schemes for European domination were any concern of ours. It focuses on a intrigue within the realm of big oil--companies who didn't mind a little dirty dealing with Germany in the interests of the almighty dollar. We begin with a Senate Committee investigation into Star Oil. It is an investigation that threatens to bring down a senator and the committee is eagerly awaiting the testimony of Chester Dimmick--but Chester has disappeared. At the same time, a mysterious Mr. Smith walks out of his house and winds up dead days later in a rooming house--evidence seems to point to the man whose rooms he had been sharing, Alfred Quinn (aka Arthur Cronch). Both men had been implicated in an earlier death of Hiram Stone, a big man in Star Oil who was staunch in his anti-Hitler beliefs.

Two newspapermen, Gridley Carson and Barney Gantt, are very interested. And Carson seems to have a way of getting all the good anonymous tips...like the one telling him that Mr. Smith was really Dimmick and that Dimmick had been murdered before anyone else knew he was dead. Carson is willing to go to jail before he'll reveal who his anonymous tipster is, but he regretfully believes that Cronch is guilty.

Barney Gantt, on the other hand, believes Cronch to be innocent and, along with FBI man Jack Higgins, starts looking for Stone's secretary who has been missing since the original murder. They will succeed in their quest--but what they find will surprise them. They also uncover a massive plot to overtake the U.S. government that goes beyond just owning a Senator.

There is another plot-line running that follows two cousins in Germany--one of whom is denounced as a traitor and sent to Dachau. Strange ties this all in for a satisfying (if unpleasant for the cousin) denouement. Lots of conspiracies and spy-ring action.

This was an interesting look at the U.S. in the years running up to the war. Not just your typical spy thriller, but giving good background on the prevalent viewpoints of the day. The mystery aspect is perhaps a bit weak--I spotted the prime villain fairly quickly, but still very enjoyable. I think perhaps this is a work that benefited from being abridged in the Mercury Mystery edition which I read. The action is stream-lined and didn't seem as bogged down in politics as Kate implies in her review from 2017 over at Cross Examining Crime. ★★★ and 1/2.

First line: At about six-thirty on a chill, rainy evening in the last week of April in the now almost forgotten spring of 1941, a man turned the corner at Seventh Avenue in New York City and walked quickly west on Twenty-fourth Street.

Last line: They said nothing. Leaning on the rail, they watched the ciy drawing away from them and were content.

Deaths = 4 (two bashed on head; one shot; one overdose)

Thank you for review. I read this one a while back before I started book-blogging so I had forgotten the story line. I like to print out the synopses and tuck them inside the book, so I'll be doing that for this one! My only other J.S.S. is Murder at World's End, languishing in the TBR pile. My copy of Look Your Last is a Collier Crime Club reprint from this series

I've got two more J.S.S. books on the TBR pile: The Bell in the Fog and The Man Who Killed Fortescue. We'll see how soon I get to those. :-)

Sounds like an interesting read. Especially with giving a good look at the prevalent viewpoints of the time and reasons for them. The quote you included could certainly apply to our time.

Yes, Gretchen. I thought that quote particularly apt--so much about the political/social climate in the US prior to WWII seems to fit in with what we've been seeing.