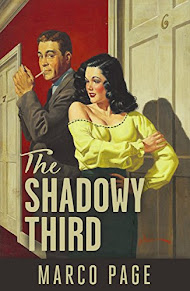 "Alibis, alibis, he added bitterly. I never heard so many alibis. You'd think somebody was printing the damn things and selling them on street corners."
The Shadowy Third (1946) by Marco Page (Harry Kurnitz)

Dave Calder, former attorney, has set up shop as a private investigator. His first job is for an old friend in the insurance business--find out who has stolen the priceless Stradivarius violin belonging to Igor Krassin, the renowned violinist. The violin disappeared from backstage at the concert hall where Krassin and the orchestra practice and perform. A successful investigation means $6,000 for Calder...a very welcome start for his business. But he gets very little help from the members of the orchestra and Krassin, who raised Cain when the instrument first vanished, doesn't seem all that concerned now.

Before Calder can make much headway, Krassin is killed and the suspect list covers pretty much anyone who knew him. He didn't exactly know how to win friends and influence people. Heading the list were Stanley Price, a petty thief who has was caught stealing from the orchestra and fired--and who has now vanished; Paula Drake, Calder's former flame as well as one of Krassin's cast-offs; her husband Arthur, who has a double-barreled motive--jealousy and, as Krassin's manager, a life insurance policy on his client;  James Pascal, an art gallery owner with an odd interest in violins; Felix Hilf, who claims the violin is rightfully his; Lina Gehris, who is actually Krassin's estranged wife and now heir to his estate; and Simon Lear, who--since Krassin didn't live to sign a will in favor of Lear's music school--seems to have no motive, but keeps popping up in the oddest ways. Will Calder be able to find the Strad before the cops do and earn his fee? Will he be able to find it before someone decides his meddling needs to stopped permanently?

This had an excellent beginning and Calder is an interesting character who has a nifty relationship with his girlfriend/secretary Ann. The set-up within the world of orchestral concert musicians was appealing. But...although there was plenty of scenes with action, the plot just didn't seem to move. It seems a little bizarre to say this about a 161 page book, but it felt like a lot of the action was padding. Despite a murder or two and Calder getting beaten up and Paula trying to make moves on Calder (and making Ann jealous) and people disappearing and reappearing all over the place, Calder just seems to be spinning his wheels--through no fault of his own. Page just didn't seem to know how to use the action to advance the story. The ending also seemed to come out of left field--if there were any clues pointing to the connection made in the Calder's wrap-up, I managed to miss them. I really thought I had pegged the least likely suspect (though I hadn't a clue as to motive) and then Page gave me an even less likely solution.  ★★ and a half.

First line: The rehearsal was scheduled for noon but by ten-thirty there were already a dozen musicians in the orchestra dressing-room and more were straggling in one or two at a time.

Last line: The door closed, the footsteps and the clatter of pails gradually receded, and then it was quiet.