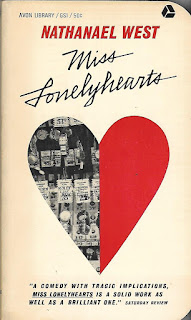 Synopsis (form the back of the book): Miss Lonelyhearts was the very sensitive young man who conducted the advice-to-the-lovelorn column in a New York newspaper. Unable to bear the tragic implications of the messages which poured into his department every day, he attempted to adopt the role maliciously suggested to him by the feature editor: that he was one of America's twentieth-century priests...

And the New York Herald Tribune had this to say: "Chapter after brilliantly written chapter moves like a rocket in mid-flight, neither failing nor falling...A grotesquely beautiful novel; if you are thoroughly shockproof, Nathanael West will richly reward your attention."

Well...I can go along with the grotesque part--but I must not be sufficiently shockproof. If I ever had a taste for high concept books, I think I must have lost it long ago. The style of West's book reminds me a great deal of Tom Stoppard's play Rosencrantz & Guild Are Dead which also did not do a whole lot for me (as evidenced by the linked review). And it definitely made me think of the quote from Shakespeare's Macbeth: Life's but a walking shadow; a poor player, that struts and frets his hour upon the stage, and then is heard no more: it is a tale told by an idiot, full of sound and fury, signifying nothing.

West's novel is just a very sad and disillusioned look at America during the Great Depression. It has taken a very bleak subject and made it--if possible--bleaker still. And has done so using a most disorienting style. Definitely not my cup of tea. ★

Oh dear. Miss Lonelyhearts is sitting atop one of my literal/physical TBR piles. I can see it from where I am sitting right now. Perhaps I should pick my next fiction read from another pile ...

Christophe: Maybe--not many people on Goodreads have reviewed it. Those who did tend to give it three stars out of five--nothing higher.